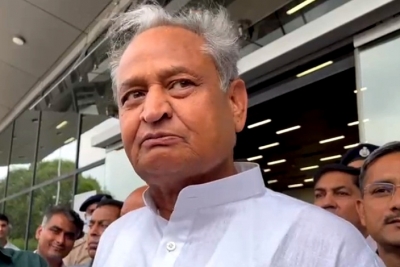 While the political stir in Rajasthan Congress looks to have settled down for the time-being, things might flare up again from Thursday with the 10-day show-cause period of three Ashok Gehlot loyalists, including two state ministers and the RTDC chairperson, ending on Wednesday.

Jaipur, Oct 5, 2022: While the political stir in Rajasthan Congress looks to have settled down for the time-being, things might flare up again from Thursday with the 10-day show-cause period of three Ashok Gehlot loyalists, including two state ministers and the RTDC chairperson, ending on Wednesday.

These three leaders were given show-cause notice for organising an unofficial meeting of party MLAs parallel to the Congress Legislative Party (CLP) meeting called by Congress observers on September 25. They were issued the disciplinary notice on September 27.

In such a situation, a reply to be given by these three leaders might again lead to a political stir in Rajasthan, said Congress sources.

After the boycott of the CLP meeting convened on September 25, the Congress observers had objected to the indiscipline displayed by the party MLAs.

Later, Chief Minister Ashok Gehlot met Sonia Gandhi in Delhi and apologised for the gross indiscipline shown by his MLAs. Since then, the tensed situation in Rajasthan Congress seems to have settled down.

The Congress had accused Dhariwal of conducting a parallel meeting of party MLAs at his residence, while Joshi was accused of boycotting the CLP meeting despite being the chief whip. Rathod was accused of arranging the logistics for the MLAs. The trio was told to submit their reply within 10 days, i.e., by October 6.

It is being said that if the party decides to take strict action, the ministerial posts of both Dhariwal and Joshi might be taken away, which will surely raise the political temperature in Rajasthan.

Sources said that some important decisions can be taken by the top party leadership with regard to Rajasthan after receiving the replies from the three show-caused leaders. Discussions are likely to take place between Sonia Gandhi, Rahul Gandhi and Mallikarjun Kharge in this regard.

nextIslamic Federation of Tamil Nadu under scanner of Central agencies