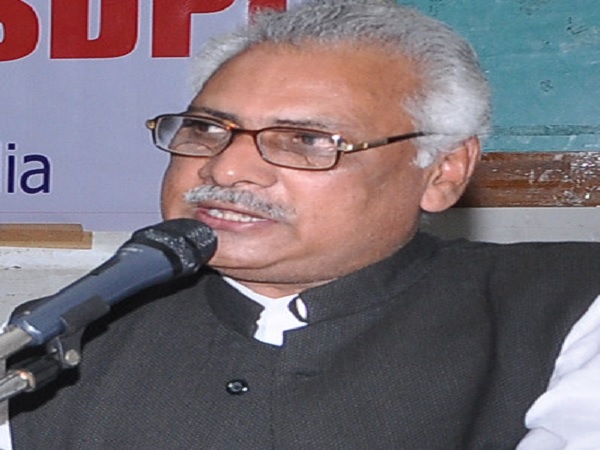 NEW DELHI: The Social Democratic Party of India, (SDPI), has condemned the Nitish-led Bihar Government for following in the footsteps of Yogi Adiyanath-led UP’s BJP Government in the arena of safety of womenfolk who continue to be at the receiving end with rapes, murders, molestations etc. being committed on them.

SDPI National Vice President Adv. Sharfuddin Ahmad in a statement vehemently criticized Bihar Chief Minister Nitish Kumar for keeping under wraps the alleged incident of setting ablaze of young woman Gulnaz Khatoon in Vaishali district of the state by a jilted lover. The woman died after fighting for life at a hospital for 15 days. This was done ostensibly so as not to overturn his apple-cart at the hustings which were on when the incident took place, he added. The accused are at large with the police still unable to lay its hands on them even after more than two weeks of the gruesome incident.

It seems, Adv. Sharfuddin said, Bihar Govt. is competing to stand up with UP Govt. after the Hathras incident wherein a Hindu girl was raped and fatally assaulted while the state administration in a bid to save the accused cremated her body in a hurry without even the kin being present at the funeral. The blazing media attention on Hathras incident received with politicians falling over each other to score brownie points put the Yogi Govt. on the back-foot. However, in Bihar a Muslim girl was burnt alive after she spurned the offer of marriage from a Hindu youth of the neighborhood. On social media, citizens have begun calling out the hypocrisy of those who turn such crimes into examples of so-called “Love Jihad” if the accused is a Muslim. Not many are saying such things in this case where the victim is a young Muslim girl from a poor family, and the accused are from a dominant caste.

He pointed out that the role of the local police here too is suspicious, much like the Hathras case. According to the news report, the police got information about soon after the attack and reached the hospital. Even though they reportedly met the victim and registered her statement, the police did not register an FIR in the case. It was only after the video of the victim giving her statement in hospital pin-pointing the accused went viral, after four days, the police registered an FIR stating the report.

He stated that there has been no uproar from any quarter and none has come forward to help the aggrieved family of Gulnaz to get justice. The national media virtually ignored it while the ruling BJP-JDU combine has maintained a stoic silence over the issue so as not to mar their celebrations of their electoral victory. The Opposition parties of all hues have looked the other way, not even making any ritualistic mention of the incident to express their grief. This incident spells out as how Muslim-Hindu divide has penetrated deep into the psyche of the society and the administration alike.

Adv. Sharfuddin opined the “Beti Bachao Beti Padhao” slogan raised by PM is a farce as in BJP ruled states women are victims of rapes, murders and molestation incidents but the police and government are mainly concerned as how to hush up the case shamelessly. The civilized societies do not have incidents such as this. It is saddest situation with all the pain and trauma for the victim girl. The culprits must be punished and the police who showed negligence and partisan approach must be rebuked.

next‘What the Nazis did to the Jews’: Macron Sparks Fresh Outrage with New Anti-Muslim Steps