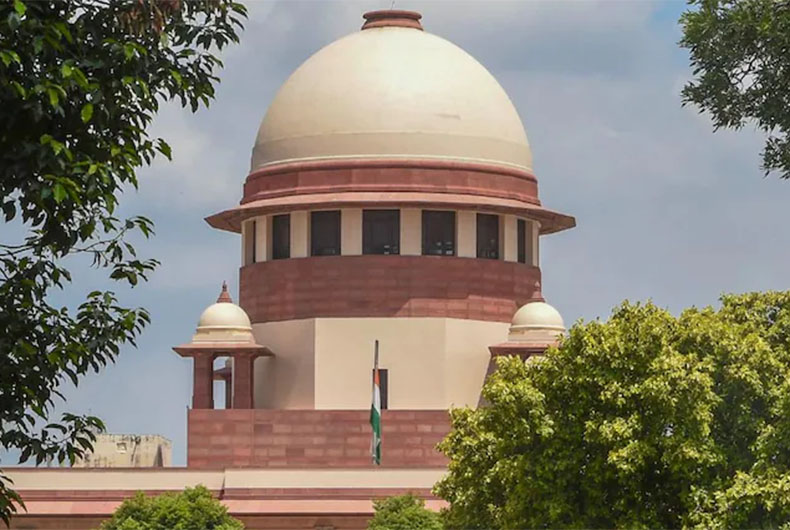 The Supreme Court on Tuesday issued notice on an appeal challenging a Gauhati High Court verdict, which upheld the validity of Assam Madrassa Education (Provincialization) Act, 1995 (repealed by the Act of 2020) and all consequential government orders, including the notification dated February 12, 2021.

New Delhi, Nov 1,2022:  The Supreme Court on Tuesday issued notice on an appeal challenging a Gauhati High Court verdict, which upheld the validity of Assam Madrassa Education (Provincialization) Act, 1995 (repealed by the Act of 2020) and all consequential government orders, including the notification dated February 12, 2021.

A bench comprising Justices Ajay Rastogi and C.T. Ravikumar sought a response from the Assam government and others. The plea, filed through advocate Adeel Ahmed, contended that high court has erroneously observed that the petitioner madrassas being government schools, and wholly maintained by the state through provincialization are hit by Article 28(1) of the Constitution of India and as such, cannot be permitted to impart religious instruction. The appeal challenges the decision that had in effect turned existing provincialized madrassas in Assam to regular government schools.

Senior Advocate Sanjay Hegde, representing the petitioners, argued before the bench that the high court decision was erroneous as it had equated provincialisation with nationalisation.

The plea added that Assam Madrassa Education (Provincialization) Act, 1995 (repealed by the Act of 2020) is only limited to the state undertaking to pay the salaries and provide consequential benefits to the teaching and non-teaching staff employed in madrassas as also the administration, management and control of these madrassa.

Hedge informed the bench that property of the madrassas was taken away.

“The land and buildings belonging to the madrassas are taken care of by the petitioners and the expenditures on electricity and furniture are borne by the petitioner madrassas themselves. The repealing Act of 2020 takes away property coupled with statutory recognition of Madrassa education and the impugned order dated 12.02.2021 issued by the Governor disbands the ‘Assam State Madrasa Board’ created in 1954,” said the plea.

The plea further contended that it amounts to an arbitrary exercise of both legislative and executive powers and amounts to a denial of the petitioner madrassas’ ability to continue as madrassas providing religious instruction coupled with religious education.

The plea submitted that such an encroachment into the proprietary rights of the petitioner madrassas without payment of adequate compensation is a direct infraction of Article 30(1A) of the Constitution of India.

The plea, in the apex court, has been filed by Md. Imad Uddin Barbhuiya and 12 other residents of Assam sought stay on the operation of the high court as an interim relief.

“The operation of the impugned judgment would result in the discontinuation of the petitioner madrassas as madrassas and would prevent them from admitting students for the old courses for this academic year,” said the plea opposing the high court judgment which was passed in February this year.

previousHiring in India IT sector slows down 18% in Oct: Report