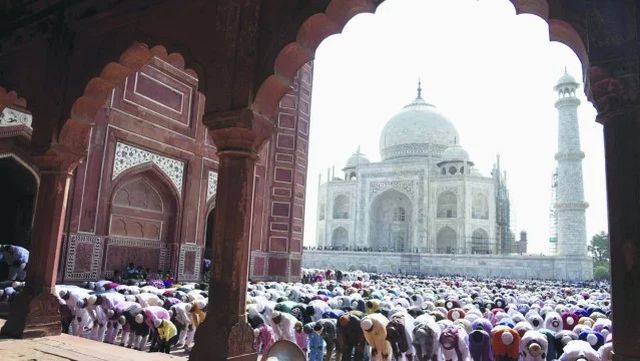 New Delhi : The Supreme Court on Monday refused to allow outsiders to offer ‘namaz’ at a mosque in the Taj Mahal premises, saying the historic monument, which is one of the seven wonders of the world, “must be protected”.

A bench headed by Justice A.K. Sikri and Justice Ashok Bhushan said there was no need to perform prayers at the Taj Mahal only as it dismissed a plea filed against Agra authorities’s order debarring outsiders from offering prayers on Fridays at the mosque inside the Taj Mahal complex.

“Why should people go to the Taj Mahal for prayers, there are other mosques also where they can offer their prayers,” asked the bench after petitioner Syed Ibrahim Hussain Zaidi, president of Taj Mahal Masjid Management Committee, contended that several tourists visit the city throughout the year and the order to restrain them from offering their prayers at the complex was “illegal”.

The district administration, to ensure foolproof security to the world heritage site, on January 24, ordered that only those with valid identity cards would be allowed entry to the monument complex to offer prayers on Fridays – when the Taj Mahal remains closed for tourists.

The order, which held that entry of outsiders could adversely affect the security of the monument, came following complaints that outsiders, including Bangladeshis and non-Indians, enter the Taj Mahal complex on Fridays on the pretext of offering prayers.