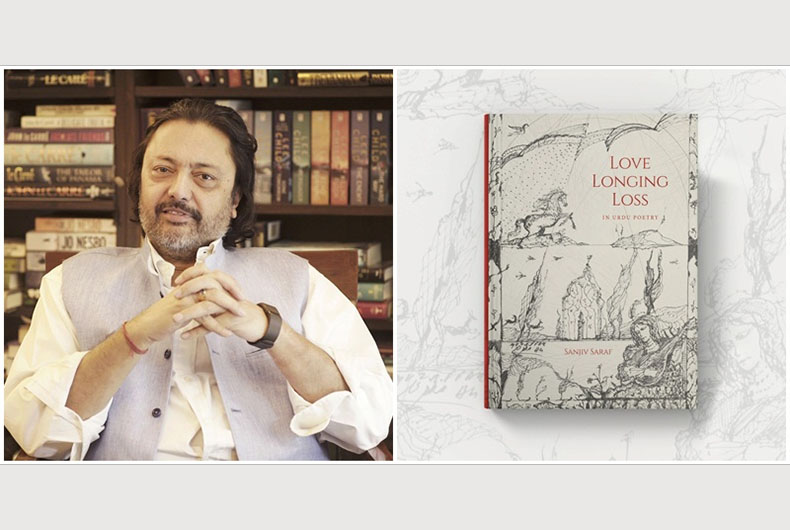 Rekhta Founder Saraf has now raised this several notches with “Love Longing Loss In Urdu Poetry”, a priceless collection of over 1250 ‘shers’ (couplets) of about 120 shaayars (poets)

New Delhi: For over a decade now, after “fulfilling (his) career responsibilities” – his company is one of the worlds largest producers of PET films with manufacturing plants in India, Thailand and Turkey with markets across the US, Southeast Asia, South America and Turkey – Sanjiv Saraf has been devoting himself to creating a platform and an ecosystem for the Urdu language that would be sustainable and institutional in nature.

The Rekhta Foundation that he established in 2012 has thus far digitised more than 50,000 e-books that are available online and has taken Urdu to various geographies through a series of events that have opened up a whole new world to the nuances and wonders of the language.

Saraf has now raised this several notches with “Love Longing Loss In Urdu Poetry”, a priceless collection of over 1250 ‘shers’ (couplets) of about 120 shaayars (poets), the cover of the book being illustrated by the multi-faceted Muzaffar Ali.

“My love for Urdu stems from the very attributes of the language itself, owing to its charm, sweetness and its unparalleled expression of emotions of every human heart. I was introduced to Urdu Shayari by my father. I grew up listening to ghazals and this poetry deeply touched me. I was fascinated with the language and my love for Urdu poetry remained constant throughout my life,” Saraf told IANS in an interview.

“After fulfilling my career responsibilities, I wanted to pursue the quest of my soul. It was then that I decided to revisit my passion and started learning Urdu script and language. The journey of learning Urdu and reading poets was full of wonders, revelations and self-discovery. I realized that it was a struggle for someone from a non-Urdu background to access the rich literary heritage of Urdu literature and poetry and felt that remedying this was something that I could contribute to,” he added.

Speaking about the process of selecting and transcreating the shers, he said over the past several decades, he had come across thousands of couplets which resonated with he and he collected them in various diaries and spreadsheets.

“I felt that this collection of the best of the best (in my opinion) should be available to readers in a single volume. I felt that while there was a plethora of books containing shers by topic, there was none which wove together all the shers around love (the dominant subject of Urdu poetry) into a readable and interesting narrative.

“Also these shers were not fully accessible to the English reading audience. So I set forth on this task and over a period of about 18 months collected, sorted, strung together and transcreated these into, what I hope, is a unique book,” Saraf explained.

Since his bent has been towards classical poetry, a far greater proportion of couplets are from the 18th and 19th centuries of poets such as Mir Taqi Mir (also known as Meer), Mirza Ghalib, Mohammad Ibrahim Zauq, and Bahadur Shah Zafar et al. There are also couplets of poets from the 20th and 21st century but lesser in number.

How does one interpret Muzaffar Ali’s cover illustration?

Wahi phool khile pairaahan mein (At that beauty’s name I recall/Those scenes in Faiz’s poetry/That henna colour, those drawstrings/Those flowers in her clothing).”

Every ghazal, he explained, “has its own world of imageries. Music, desire, hope, madness, tears, love, romance, nature, wilderness and purity of emotions are some elements essential to this genre. When given shape out of the chaos of thoughts, this is the picture the artist`s mind conjured while depicting the essence of Urdu poetry. There is the musician with melancholic strains, the gazelles in the wilderness, the steed of time racing forth and the birds flying – all depicting different elements and tropes of the poetic genre”.

“My good friend Muzaffar Ali, well-renowned for his skill as an artist and filmmaker, came up with this illustration when I presented him a draft of this book,” Saraf added.

Describing the journey of the Rekhta Foundation from its inception to the present day, he said it started with a very small endeavour to present the selected works of major poets in three different scripts – Urdu, Devanagari and Roman, so that readers from all backgrounds could access this literary treasure.

“However, after this was launched it gained immense popularity and acquired a life of its own. It was like an omnivorous entity which kept demanding more and more and kept growing without bounds. I will refrain from giving details of the different stations of the journey but it suffices to say that we are now engaged in areas which we had never even dreamed of. Poetry, prose, dictionary, script learning, education, festivals and events and We don’t know where it will take us. To quote Ghalib:

Saraf’s time is now fully devoted to the Rekhta Foundation and associated work.

“The business aspects are all handled by outstanding professionals. God has been kind in enabling me to support this initiative but I am not alone in this effort. Many friends, associates and lovers of Urdu language have supported Rekhta in various capacities and their love continues to be Rekhta Foundation`s driving force,” Saraf concluded.

(Vishnu Makhijani can be reached at vishnu.makhijani@ians.in)

nextHate is Normal in India Today, Thanks to Social Media – Dr. Zafarul-Islam Khan