Former co-CEO of Deutsche Bank, Anshu Jain passes away at 59

India emerges as a global leader in travel in 2022 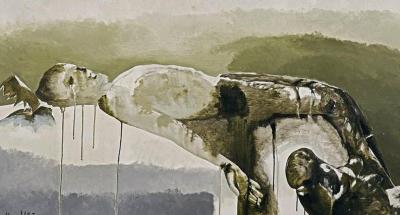 New Delhi, 12thJune 2022:The latest edition of AstaGuru’s Modern Indian Art ‘Collectors Choice’ online auction, will take place on June 23-24, 2022, providing collectors with an exceptional opportunity to acquire masterpieces and rare compositions. While works by members of the Progressive Artists’ Group remain highly valued, the auction has a diversified art collection with significant works by other celebrated names in Modern Indian Art.

Lot 41, a work by artist Tyeb Mehta, leads the stellar lineup. The work was completed around 1962, during a period when he was inspired by the works of British figurative painter Francis Bacon. Tyeb Mehta, who was living in London at the time, was also influenced by philosophical reflections on human frailty. The canvas depicts a lonely, isolated figure painted with a heavy impasto technique and a limited colour palette. It will be priced between INR 3,00,00,000 and 4,00,00,000.

Sunny Chandiramani, Vice President- Client Relations, AstaGuru Auction House, said, “Our �Collectors Choice’ edition has emerged to be one of the most anticipated auctions by the collectors. It has consistently garnered tremendous response due to the vastness and diversity of the collection offered. The �No Reserve’ format makes it more accessible for a larger collector base to participate in the auction since bidding starts at INR 20,000. These works have been part of noteworthy collections and also stand as significant milestones in the artists’ careers. Several of these rare gems are appearing in an auction for the first time. The auction also features sculptures by respected artists including Prodosh Das Gupta, Sankho Chaudhuri, Himmat Shah, Krishen Khanna, Ram Kumar, K Laxma Goud, P V Janakiram, and S Nandagopal.”

Lot 164 is a work by artist Arpita Singh titled ‘Counting Flowers: My Benares Saree.’ It was completed in 1997 and is an archetypal example of the artist’s visual idiom, colour composition, and recurring motifs seen in her works. It will be priced between INR 80,00,000 and INR 1,000,000.

Lot no. 5 is a magnificent work by one of India’s ‘Navratna’ artists, Nicholas Roerich, which is being auctioned for the first time. Roerich, known as the ‘Master of Mountains,’ was a symbolic painter whose sapphire hues and hidden clouds of white will forever be etched as magnificent representations of the Himalayan range. This work, completed around 1940, will be offered for INR 30,00,000 � 40,00,000.

The entire auction catalogue is available on www.astaguru.com, and the auction will be held on the website on June 23rd and 24th, 2022.