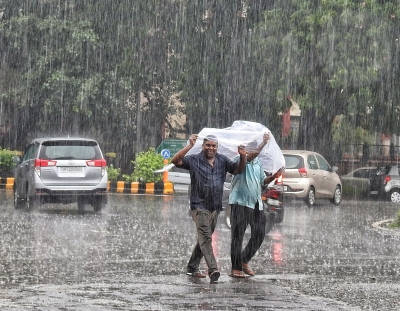 Residents of the national capital had a torrid day on Friday as intermittent rain and water-logging in low-lying areas, coupled with the massive protests by the Congress, ultimately led to massive traffic jams all over the city.

New Delhi, Aug 5, 2022: Residents of the national capital had a torrid day on Friday as intermittent rain and water-logging in low-lying areas, coupled with the massive protests by the Congress, ultimately led to massive traffic jams all over the city.

Congress had announced a nationwide protest against the policies of the Central government which has allegedly led to rise in unemployment and inflation in the country.

Due to the party’s protest, the Delhi Police maintained adequate security arrangements while the Delhi Traffic Police issued an advisory for the commuters asking them to avoid certain stretches.I n the advisory, the traffic police said that due to special arrangements, traffic movement will be hardly possible on Kamal Ataturk marg, Kautilya Marg, Teen Murti Marg, Rajaji Marg, Akbar Road, and Safdarjung Road.

Due to all these traffic restrictions, the commuters had to face a hard time for half of the day.

Towards the afternoon, a brief spell of rain caused water-logging in the city’s low-lying areas.

Traffic was affected on New Rohtak Road in both the carriageways from Anand Parbat towards Zakhira and vice-versa due to waterlogging near Gali No. 10, Anand Parbat. The traffic police requested the people avoid using this stretch.

A massive traffic jam was also witnessed in-between Singhu Border and Mukarba Chowk due to heavy water-logging in front of Apple Mandi, Khampur Village, and near Banku Rasoi.