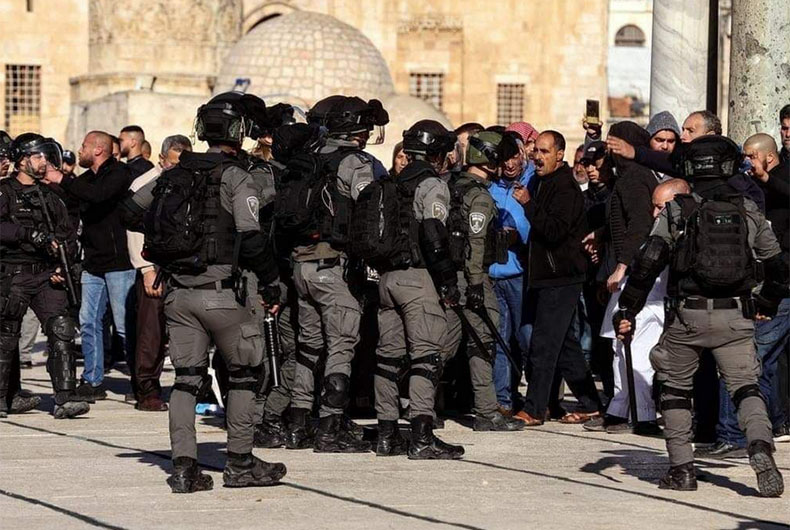 The protests in several West Bank towns and villages broke out hours after 153 Palestinians were injured during clashes with the Israeli police on Friday morning at the compound of Al-Aqsa Mosque in East Jerusalem.

More than 153 Palestinians were injured at dawn on Friday as the Israeli police stormed the courtyards of Al-Aqsa Mosque, the Palestinian Red Crescent said.

In a statement, the Islamic Endowment Department in Jerusalem, said that one of the mosque’s guards was hit in the eye by a rubber-coated metal bullet.

Eyewitnesses told news agency Anadolu Agency that the Israeli police pursued the worshipers and beat them in the mosque’s courtyards.

For its part, the Israeli police announced in a statement that three of its members were slightly injured by stones thrown at them. The police also noted in another statement that its forces removed the “rioters” in Al-Aqsa Mosque and arrested about 300 of them.

Thousands of worshipers were in the mosque where they were performing the morning prayer.

Saudi Arabia on Friday condemned and denounced Israeli occupation forces for storming the Al-Aqsa Mosque in Jerusalem, closing its gates, and attacking unarmed worshipers inside the mosque and in its external courtyards.

“The Kingdom called on the international community to assume its responsibility in holding the Israeli occupation forces fully responsible for the repercussions of these ongoing crimes and violations on the defenseless Palestinian people, their land and their holy sites, and on the chances of reviving the peace process in the Middle East,” the ministry said in a statement.

UN Secretary-General Antonio Guterres has voiced grave concern over the deteriorating security situation in Jerusalem and called for efforts to de-escalate the tension, said his spokesman.

The secretary-general on Friday called on leaders on all sides to help calm the situation. Provocations on the holy site, sacred to both Jews and Muslims, must stop to prevent further escalation, said Stephane Dujarric, the spokesman, in a statement.

Guterres reiterated his call for the status quo at the holy sites in Jerusalem to be upheld and respected, said the statement.

UN Special Coordinator for the Middle East Peace Process Tor Wennesland is in close contact with key regional partners and the parties to calm the situation. Guterres reiterated his commitment to supporting Palestinians and Israelis to resolve the conflict on the basis of relevant UN resolutions, international law and bilateral agreements, said the statement.

The tension between Israel and the Palestinians has flared up in the West Bank and East Jerusalem over the past three weeks as the Jewish festival of Passover overlap with the Muslim holy month of Ramadan.

In 2021, clashes in Jerusalem led to an 11-day conflict between Israel and the Gaza Strip.