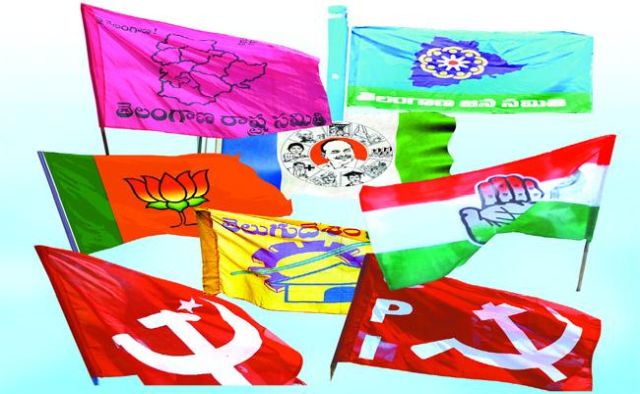 Hyderabad : From farm loan waiver up to Rs 2 lakh to unemployment allowance and from doubling security pensions to free cows, laptops and bicycles, major political parties in debt-ridden Telangana are promising the moon to the voters.

The main contenders of power have made a whole lot of promises like one lakh jobs in first year, hiking retirement age of government employees from 58 years to 61 years, financial assistance for the marriage of poor girls and grants for women self-help groups.

India’s youngest state may be under a huge burden of public debts but this has not deterred the ruling Telangana Rashtra Samithi (TRS), the Congress-led People’s Front and Bharatiya Janata Party (BJP) from promising all sorts of freebies to voters for December 7 elections to the Telangana Assembly.

Chief Minister K. Chandrashekhar Rao told the Assembly in March that the state’s debts stood at Rs 1.42 lakh crore. The opposition parties, however, claimed during the poll campaign that this was Rs 2.5 lakh crore.

The TRS, which was already under fire from the opposition for not fulfilling most of the promises made in 2014, was the last party to release its manifesto. KCR released the document at an election rally in Hyderabad on Sunday.

KCR has been claiming that Telangana is number one in the country in terms of welfare. The TRS government claims to be spending a whopping Rs 40,000 crore annually on social welfare pensions and other welfare schemes.

The government is spending Rs 13,000 crore a year on pensions alone but with all the main parties promising to hike the pension amount, it is estimated that the allocation will have to be doubled.

The ruling party also assured that financial assistance to farmers as input subsidy under ‘Rythu Bandhu’ scheme will be increased from Rs 8,000 per acre per year to Rs 10,000.

The BJP has promised free bore-well or well or pump set for each farmer. BJP’s promises also include distribution of one lakh cows annually during festivals, free laptops for all students pursuing under-graduate courses and free cycles to all girl-students from class 7 to 10.

The Congress promised financial assistance of Rs 1,50,116 for the marriage of poor girls against Rs 100,116 being provided by the TRS government under ‘Kalyan Lakshmi’ scheme. The BJP said each girl will get Rs 1 lakh cash and one tola of gold at the time of marriage.

The Congress said that all Women Self-Help Groups (SHGs) will be given a grant of Rs 1 lakh each. Each SHG will be permitted to get a bank loan of Rs 10 lakh, for which the interest will be paid by the government.

The BJP declared interest free loans of Rs 5 lakh to women SHGs. They will also get free smart phones.

The Congress has pledged free treatment up to Rs 5 Lakh for all diseases under ‘Araogyasri’. A 20-30 bed hospital will be built in each ‘mandal’ (block).

The BJP assured Rs 5 crore health insurance cover for all under Ayushman Bharat Yojna and generic medicines in all mandals.

The TRS promised that double bed-room housing scheme for poor will continue and those who own plots will be provided financial assistance of Rs 5-6 lakh to build the house.

The Congress also promised Rs 5 lakh assistance. The BJP promised houses for all eligible people by 2022 and till then, the government would give Rs 5,000 rent every month.