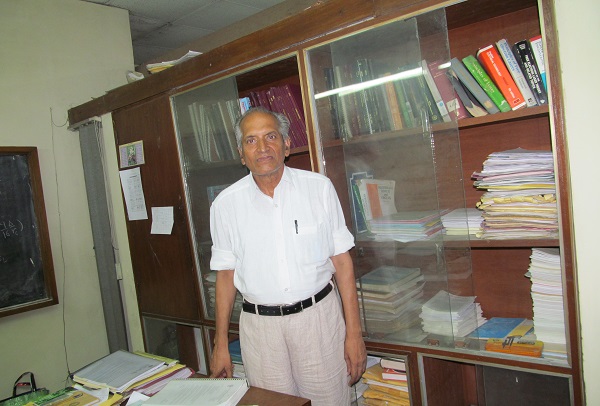 New Delhi JAN O3,2022: IIT Delhi’s renowned Physicist Prof VK Tripathi has been conducting workshops for the madrassas students and teachers since 2014. In a video titled “misconceptions about madrassas” that was shared by his daughter on various social media platforms, Prof VK Tripathi can be seen sharing his experience of teaching at the madrassas.

Rakhi shared the video in response to a conversation between his father and a guard who nonchalantly used the word, “Madrassa-chhaap”. Rakhi tweeted that his father felt abused and thus came out with the video in order to clear the air around the misconception.

He said, “The teachers and the students there are very simple and hail from a humble background. Though I accept that their manner of teaching is old school…”

He adds, “I started a workshop with around 80 teachers, they used to get bus fare and came to attend the workshop from far and beyond, I wanted to make maths and physics interesting and easy to understand, I ran my classes from 9 to 4..”

He says that he has received a lot of love, “I am sure only those who have love can impart love..”

He called their way of life as sada libas, sada khana and went on to compare them with the aura of Gandhi Ashram.

“Even the renowned madrassas like Nadma, Darul Uloom, and Deoband are very simple and down to earth..”

He recalls an incident at the Madrassa Ul Islah near Azamgargh’s Sarai Mir which he visited while on a sabbatical, “I went there and came to know that many among them had completed their education from Jamia and JNU, while we were talking, their Principal stood up and got some chalk and requested me to give a lecture..”

Prof Tripathi says that he went on to give a lecture on Newton’s speed formula, “I felt so relieved, I felt happy at their intent of learning..”

He then narrates the scenes from Bilawiyaganj madrassa where the elder kids study the syllabus from NCERT”s 11th and 12th standard books, “there isn’t any show-off and as responsible citizens, we mustn’t look down upon them that too without any knowledge..”

He said that in Jamia, JNU and other colleges he has come across students with madrassa backgrounds, “The kids are studying English, Sciences, Engineering and even many are working in the media…”

He accepted that the places lacked modern lab equipment and computers but these are the responsibility of the management and government and teachers or kids shouldn’t be dragged into the same..”

The Twitterati was all praise for the Prof and his syncretic values of spreading knowledge without any biased.

previousPolice scrutiny of Madrasa teachers from outside Assam: Himanta