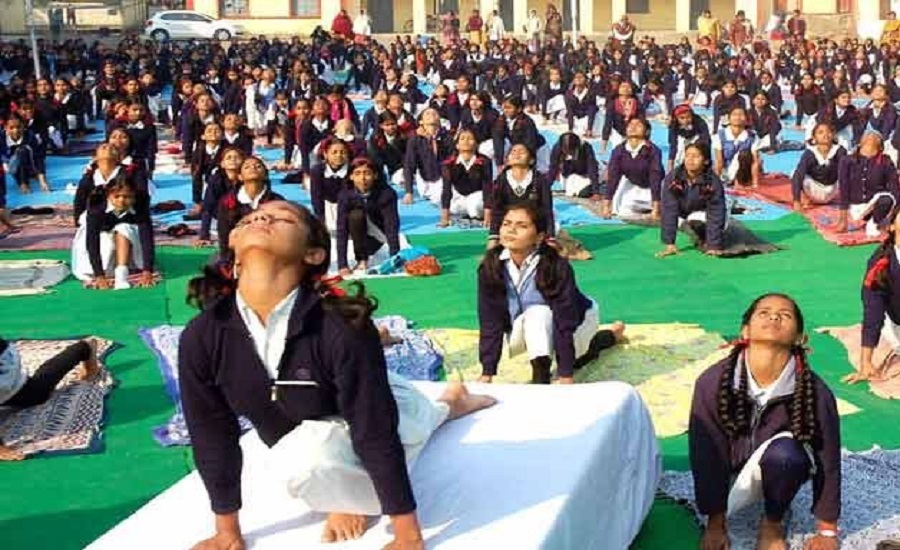 “The Muslims of J-K are respectful of all religions and believe in harmonious coexistence, but will never yield to any pressure, if and when there is any interference in matters related to their faith”

SRINAGAR — As ‘surya namaskar’ amounts to puja of the sun which is prohibited in Islam, various political and religious groups on Friday criticised the Jammu and Kashmir administration’s order directing college heads in the union territory to organise large-scale ‘surya namaskar’ on the occasion of Makar Sankranti.

The event was to be held online on Friday as part of the Azadi Ka Amrit Mahotsav celebrations and officials of the Higher Education department did not respond to queries about it, reports PTI.

The Muttahida Majlis-e-Ulema (MMU), an amalgam of several religious organisations, took strong exception to the order and said the authorities were well aware that Jammu and Kashmir is Muslim-majority and like people from other religions, Muslims will not participate in religious practices of other religions, according to the report.

“To deliberately force them to do so by issuing directives is mischievous,” it said.

“The Muslims of J-K are respectful of all religions and believe in harmonious coexistence, but will never yield to any pressure, if and when there is any interference in matters related to their faith, MMU said in a statement.

“The recent open call to genocide of Muslims of India at a religious conference in Haridwar and the silence of the state in this regard is a shocking case of bigotedness and discrimination against Muslims, which has become the order of the day, it alleged.

The amalgam asked the administration to desist from issuing such orders in the future.

Mehbooba, who is also the PDP president, said the Centre’s misadventures aim to collectively humiliate Kashmiris.

GOIs PR misadventures aim to demean & collectively humiliate Kashmiris. Forcing students & staff to perform surya namaskars by issuing orders despite their obvious discomfort with imposition of something laden with religious connotations gives an insight into their communal mindset, Mehbooba said in a tweet.

In a series of tweets, Lone said the government will not succeed and the will of the people will eventually prevail.

Why is the govt so insensitive. Now comes the surya namaskar episode. I wish the govt of the day understands that along many bloody battles fought in Kashmir — of immense importance was the war between liberal and radicals, Lone wrote on Twitter.

Lone said with the ‘surya namaskar’ directive, the government was emulating the radicals .

We have seen the brute power of the radicals all through nineties. U will not succeed. The will of the people will eventually prevail, he said.

Apni Party president Syed Mohammad Altaf Bukhari also took strong exception to the order and said the educational institutions must be kept aloof from political maneuvering and emphasis should be laid on providing quality education to the students.

Celebrating festivals is an individual choice and the state has no right to interfere in it. However, this recent edict for observing Surya Namaskar in colleges across J-K is undoubtedly a dangerous enterprise that carries serious implications. The administration must stop communalising the academic atmosphere and should rather focus on the upgradation of these educational facilities, he said.

He asked the government to withdraw the controversial order and desist from issuing such arbitrary diktats in the future.

Earlier, the All India Muslim Personal Law Board (AIMPLB) had opposed the move, saying ‘Surya Namaskar’ is a form of Surya puja (worship of the sun) and Islam does not allow it. Defying all logic, Maulana Khalid Saifullah Rahmani, general secretary of AIMPLB said in a statement that India is a secular nation and the customs of the majority community cannot be ‘imposed’ on all religions. He called on Muslim students to boycott the Surya Namaskar program.