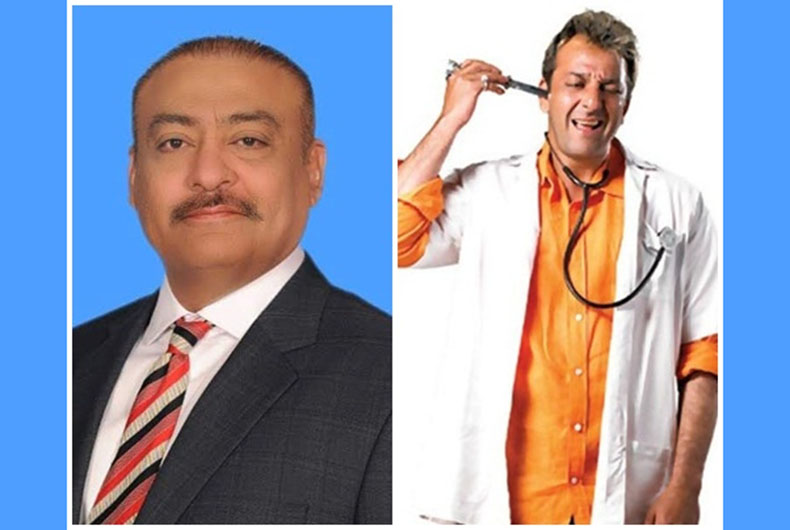 Karachi: Pakistan Health Minister Abdul Qadir Patel has indicated that he is happy to be called ‘Munna Bhai MBBS’ — a famous character played by Sanjay Dutt in the 2003 Bollywood film by the same title, media reports said.

The Health Minister was responding to questions from reporters who reminded him of the criticism he has faced for not being a physician himself, Samaa TV reported.

Speaking at the Karachi Press Club, Patel said that he never said that he would perform surgeries or write prescriptions.

Patel said that when someone calls him ‘Munna Bhai MBBS’, he enjoys it.

“It is a wonderful film. He [the protagonist] heals everyone with his ‘jadoo ki jhappi’ (magical embrass),” he said.

“When did I say that I would perform surgeries or prescribe medicine to people? My job is to provide administrative supervision, to get things done in the right way,” Patel added, Samaa TV reported.

The Health Minister also said that he never objected to Pervez Khattak’s appointment as Defence Minister under the former PTI government — taking a dig at Khattak’s lean body shape.

Patel described himself as a political worker who has spent 30 years on the streets of Karachi.

He also rubbished reports that the current government is going to discontinue the health card project launched by the PTI government.

Patel is one of the most outspoken politicians in Pakistan. However, he came under criticism after replacing Faisal Sultan as the health chief in April.

Sultan, who was not an elected member of the National Assembly, served as special assistant to former Prime Minister Imran Khan and played a key role in Covid control efforts.