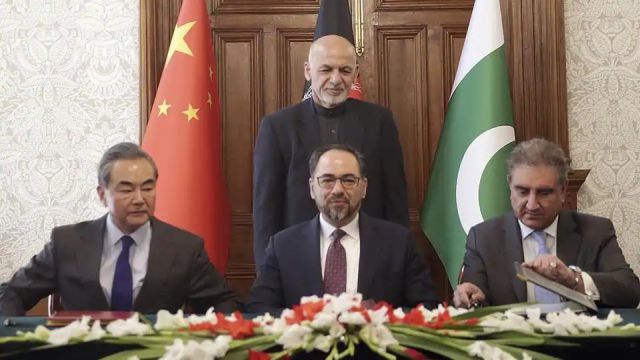 The MoU was signed by Pakistan’s Foreign Minister Shah Mehmood Qureshi and his Chinese as well as Afghan counterparts Wang Yi and Salahuddin Rabbani, respectively. The signing of the document was witnessed by Afghan President Ashraf Ghani.

Speaking at the trilateral dialogue, Rabbani said that collective efforts were required to address the common challenge of terrorism. “We desire to strengthen our relations with Pakistan,” he said and also appreciated the Chinese One Belt One Road initiative.

Qureshi, during a joint press conference, called for a joint strategy to eradicate terrorism from the region. He said he was visiting Kabul to bridge the trust deficit between the two countries, the Express Tribune reported.

“We all want peace and stability in Afghanistan,” the minister said, adding that Pakistan will continue to play facilitative role in Afghan reconciliation process.

“We will do everything to support the growing momentum towards reconciliation provided others play their due role and share responsibility and create an enabling environment towards that end.”

Calling Afghanistan and Pakistan as “friends of China”, Wang said that Beijing will extend “every possible cooperation to build trust and confidence between the two countries”.

China will also assist in establishing connectivity projects including a rail line between Peshawar, Kabul and Kandahar, he said, adding that Beijing “desires to make Afghanistan a part of the China Pakistan Economic Corridor”.

“We support an Afghan-led and Afghan-owned peace process,” Wang said.

This was the second meeting of the three foreign ministers after their kick-off meeting in Beijing last year.