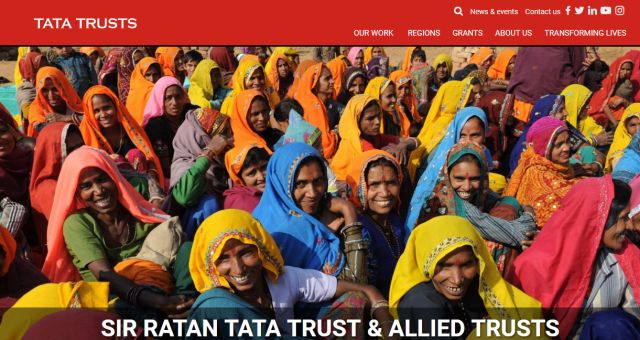 Mumbai : In a move that will bring back the Tata family into the Tata Trusts, Noel Naval Tata was on Wednesday appointed as a trustee to the Sir Ratan Tata Trust.

A previous IANS story had incorrectly said that Noel Tata has been appointed as the head of Sir Ratan Tata Trust.

Sir Ratan Tata Trust is the second largest trust among the dozen-odd charities that make up the Tata Trusts.

Noel Tata is the half-brother of former Tata Sons and Tata Group Chairman Ratan Tata, and is currently the Chairman of Trent Ltd and Managing Director of Tata International.

Along with Noel Tata, long standing philanthropist Jehangir H.C. Jehangir has also been roped in as a trustee of the Sir Ratan Tata Trust. Jehangir is spearheading the healthcare mission at the Jehangir Hospital in Pune.

It is being speculated that Noel Tata, 61, is being groomed to succeed Ratan Tata as the Chairman of Tata Trusts. His current assignment is being seen as a precursor to the move that would ensure that Tata Trusts retains the signature Tata name.

Noel Tata’s brother-in-law, Cyrus Mistry, was named the Chairman of Tata Sons in 2011, a position he held till 2016 before being removed unceremoniously. At that time too, Noel Tata’s name surfaced as a top contender for the post. But the position went to N. Chandrasekaran, the then Tata Consultancy Services (TCS) Chief Executive Officer.

The decision to rope in Noel Tata came on a day when R. Venkataramanan, the Managing Trustee of Tata Trusts, announced his decision to resign from the post after completing his 5-year tenure.

“The trustees placed on record the significant contribution of Venkataramanan in steering and executing the objectives of the Trusts’ portfolios over the last five years,” a Tata Trusts statement said.

Venkataramanan’s resignation gains significance as he was subject to a CBI investigation last year for allegedly trying to manipulate government policies through corrupt means to get an international licence for AirAsia India.

According to the statement, Venkataramanan had requested the Tata Trusts Chairman and trustees that since he was completing five years in the post and was exploring other options, he should be relieved from his responsibilities.

Accordingly, at a trustees’ meeting held on Wednesday, his request was accepted. Venkataramanan will relinquish his duties on March 31.

A committee of trustees, comprising Tata Trusts Chairman Ratan N. Tata and Vice-Chairmen Vijay Singh and Venu Srinivasan, has been set up to oversee the operations and select a new CEO to replace Venkataramanan.

Established in 1892, the Tata Trusts is the country’s oldest philanthropic organisation that is engaged in the areas of healthcare and nutrition, water and sanitation, education, energy, rural upliftment, urban poverty alleviation, arts, crafts and culture.

nextGoogle to invest $13 bn in the US this year