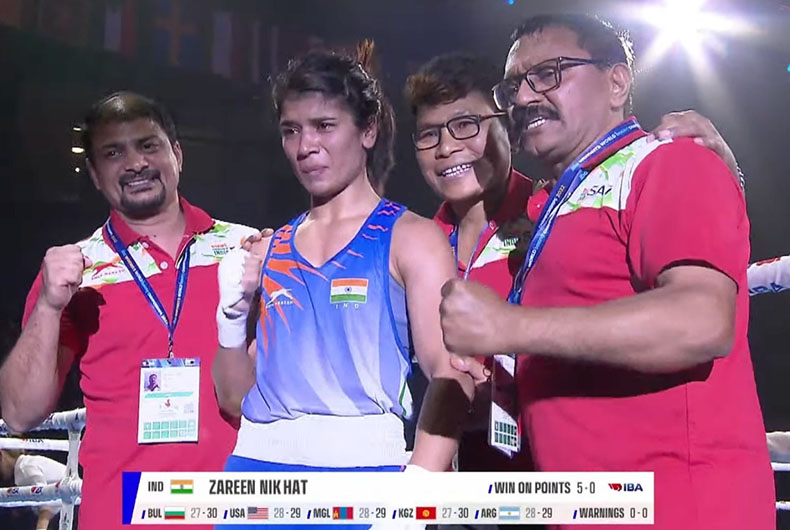 New Delhi: Indian boxer Nikhat Zareen on Thursday bagged a gold medal after beating Jutamas Jitpong of Thailand 5-0 in the 52kg final of the Women’s World Boxing Championships in Istanbul.

Nikhat is the fifth Indian woman boxer to win a gold medal in the world championship, attained glory in a 13-year-long journey with sheer hard work and determination.

The 25-year-old achieved the feat in Turkey, 11 years after she bagged gold in the Junior World Cup women’s boxing championship in the flyweight category in the same country. She was the first boxer from then undivided Andhra Pradesh to achieve the feat.

She was in top form as she used her technical acumen and covered to court well to outwit her nimble-footed opponent.

Nikhat managed to impress all the judges in the first round as she landed far more punches than the Thai boxer.

The second round was tighter and Jitpong clinched it 3-2. Needing to get just one judge on her side in the final round, Nikhat went all in and slammed the door on her opponent to eventually record a 5-0 unanimous decision in her favour.

The second round was tighter and Jitpong clinched it 3-2. Needing to get just one judge on her side in the final round, Nikhat went all in and slammed the door on her opponent to eventually record a 5-0 unanimous decision in her favour.

Earlier on Wednesday, Nikhat had pulled off a comprehensive 5-0 win against Brazil’s Caroline De Almeida in the 52kg semifinal.

Hailing from a middle-class and conservative Muslim family and coming from Nizamabad town, which lacked sports infrastructure, Nikhat overcame all odds with a steely resolve to carve out a niche for herself.

“When Mohammed Ali’s daughter can do it, why can’t I?” Nikhat had asked after taking to the boxing ring in 2009.

Third among the four daughters of Jameel and Parveen Sultana, Nikhat wanted to prove that she could do it. She finally proved her mettle with hard work, discipline and commitment.

On Thursday, Nikhat’s parents and her three sisters were elated and proud as she defeated Thailand’s Jitpong Jutamas in the 52kg category to join the selected club of Indian women boxers who have achieved glory in the World Championship.

Within six months after taking to the ring, she won the State championship gold in 2010 in Karimnagar. She was picked for the Rural Nationals in Punjab, where she bagged the gold.

The success run continued as she won the gold in the sub-junior nationals in Tamil Nadu.

Her father Jameel Ahmed was a sales officer in Saudi Arabia before returning home.

“It is not easy for girls to take to sports, but in her case, it was not a difficult decision. She wanted to follow in the footsteps of her cousins, who are international boxers. So this is like a family game for her,” Jameel Ahmed, a former state-level football player, had said after her 2011 victory.

Trained by her uncle

Nikhat did not have to search for a coach either. Spotting the inborn qualities of a boxer, her uncle Mohammed Samsamuddin, started training her in the open space at the Sports Authority of Andhra Pradesh (SAAP) training centre in Nizamabad. The lack of proper infrastructure in the town did not deter her from achieving her goal.

Nikhat started practising with her three cousins, who were international boxers. According to Samsamuddin, she developed an interest in boxing after watching his sons, practised with them, and thus grew in confidence and courage.

Though winning a medal at the Olympics is Nikhat’s ultimate goal, her bid in the 2020 Tokyo Olympics ended under controversial circumstances when Mary Kom qualified by defeating her in an intense and ill-tempered trial bout in 2019.

The Boxing Federation of India (BFI) had agreed for the trial bout after Nikhat had thrown the challenge. Earlier, the boxer from Telangana was not happy after the BFI had called off a trial bout at the last minute to send Mary Kom to the 2019 World Championships in Russia.

However, Nikhat put behind the bitterness and overcame a shoulder injury, which had kept her out of action for one year, to remain focused on her career.