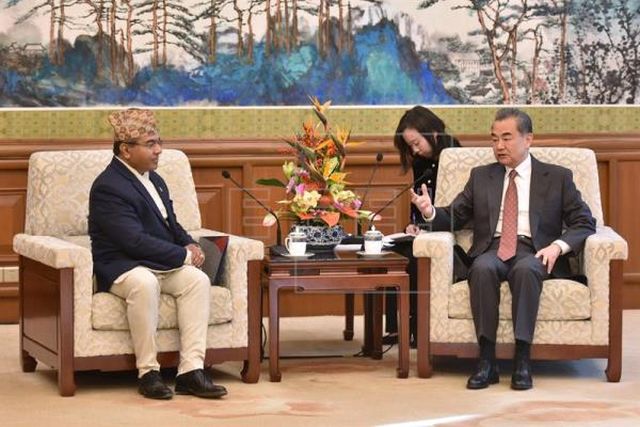 Shanker Das Bairagi met Wang Yi at the Diaoyutai Guest House in Beijing ahead of the 12th meeting of Nepal-China Bilateral Consultation Mechanism that was held later in the day, the Nepalese Embassy in Beijing said in a statement.

“The two sides held substantive and fruitful discussions on the entire gamut of Nepal-China relations and reviewed the status of bilateral cooperation,” the Embassy was cited as saying by Efe news.

During the meet, the two countries agreed to boost bilateral relations through cooperation in various sectors, including connectivity, infrastructure development, trade, investment and energy.

They also agreed to expedite implementation of past agreements and projects under bilateral cooperation agreements.

China expressed its willingness to lend support to Nepal’s development efforts, according to the statement.

Beijing has been trying to increase its influence in the landlocked Himalayan nation — which has traditionally been dependent on India for trade and economic support — through investments in infrastructure and financial aid.

previousDifferences either get settled or Governors make way: Jaitley

nextTata Motors to increase prices of passenger vehicle up to Rs 40,000