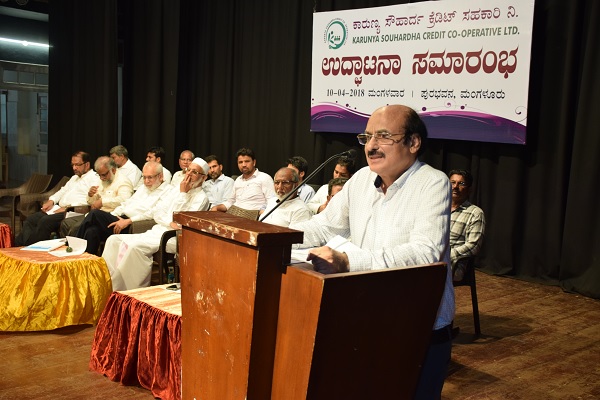 Mangalore : Renowned thinker, writer and Head of Chair in Islamic Studies, Yenepoya University, Mangalore, Dr. Javed Jamil said that “Islamic Economics, the way it is understood today is less of Islam and more of economics.” He was speaking as Chief Guest on the occasion of the inauguration of  Karunya Sauhardha Cooperation Society at Mangalore on Tuesday.  He said that “Islamic Economics needs to be purified, expanded and globalised”.

Dr. Jamil lamented that while there is a great scope of Islamic Economics in the country as well as the world but “under the prevalent regulatory mechanism, which does not allow Banking based on Share of Loss and Profit, true Islamic Banking is not prospering in India.”  He told that the last UPA government had taken certain steps that could have opened the gates of Islamic Banking in India but the present Government has nullified all the efforts in that direction.

Dr. Jamil said that though he is not fully satisfied with the way the so-called Islamic Banks are functioning in the world, he still supported them because they are better in many ways than the conventional banking and they provide an opportunity for Muslims to be part of the Banking Sector.

Dr. Jamil said that “the ideal Islamic Economics is not just about Islamic Banking and Zakat and is more about  wealth generation within Islamic parameters, campaign against the commercialisation of all forbidden practices including usury, alcohol, gambling and sex and development of a taxation system based on Islamic concepts of Zakat, Ushr and Khums.” He lamented that there has not been any worthwhile efforts in developing a taxation system based on Islamic principles. He described Economic Inequality as the most glaring disastrous effect of the modern economic order and argued that only a true Islamic Economic Model can undo the damage.

Dr. Jamil argued that “we need to have a dynamic concept of Zakah, which indicates an Islamic taxation system based on accumulated assets rather than Income and Sales tax.” “When  Quran calls for giving Zakah, it exhorts Muslims to generate wealth,” he said, “because without incomes neither the Zakah system nor the financial system can prosper.” He stressed an all-out economic empowerment campaign and said that Muslims must enter the Corporate Sector in a big way “albeit without indulging in the negatives of the modern day corporates”. He lamented that out of 1000 listed companies in India, the number of the companies headed by Muslims are hardly about a dozen.

The programme was organised by JIH, Mangalore on the occasion of the inauguration of Karunya Sauhardha Cooperation Society.

nextDebt funding: Addressing mismatch in expectations between yourself and lenders