Over 59,000 register for Agnipath scheme 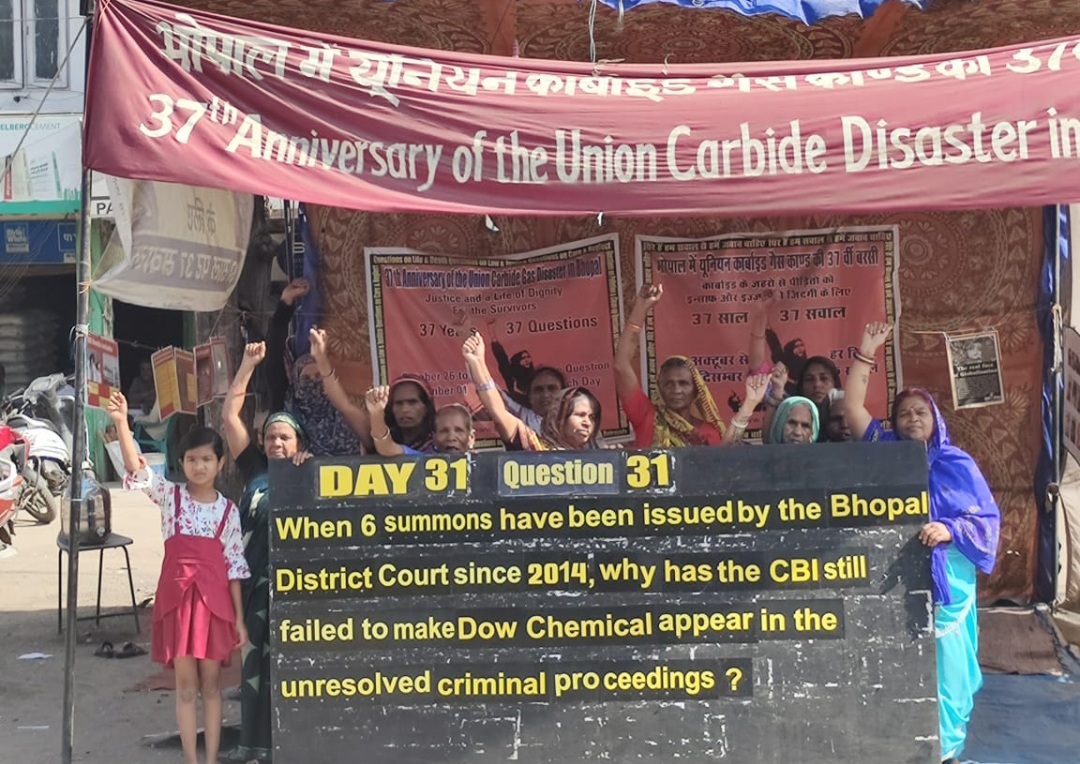 By Pervez Bari
BHOPAL: Come 3rd December every year the Madhya Pradesh Govt. holds the ritual of all religion condolence meeting of paying tributes to the departed souls who have perished in the 1984 Union Carbide Bhopal Gas disaster, said to be one of the biggest chemical and industrial disasters of the world. Thereafter, the governments of MP and the Centre also forget about their responsibilities to provide succour to the ailing survivors and help the courts to punish the culprits of the tragedy.

While on other hand the survivors of the tragedy represented by various NGOs working for their welfare mark the day by holding protest marches and rallies raising slogans demanding justice which has eluded them all these years and burning of effigies to exhibit their anger and helplessness.

So, this year also it was all over the same again as usual. Nothing has changed all over the years for the survivors and their disabled progenies born with birth defects who were maimed  for life by the tragedy. They continue to suffer unending miseries from multiple medical ailments coupled with economic crisis too. The economic crisis is due to their inability to work and earn their living.

The 37th anniversary of Bhopal gas tragedy also witnessed a number of protests by the tragedy survivors and their organisations while demanding justice to those who were killed and are surviving.

Madhya Pradesh Governor Mangubhai Patel took part in an all religion meeting organised in the memory of the departed souls at the Central Library, Barkatullah Bhawan. Various religious leaders too took part in the meeting.

While in his message state chief minister Shivraj Singh Chouhan paid homage to the people who died during the gas disaster. The CM tweeted: “In the Bhopal Gas Tragedy, we have lost many precious lives untimely. I pay my humble tribute to all those departed souls. May such a tragedy never recur on the earth. With the joint efforts of the government and society, we can stop such humanitarian errors.”

Protesters in Bhopal torched effigies of Dow Chemical Company, the present owners of the Union Carbide, and other multi-national companies. They  demanded justice including Rs 50 lakh compensation to the victims. The Bhopal gas tragedy survivors’ organizations condemned the state and central governments for denying justice and a life of dignity to the survivors.

The Bhopal gas tragedy survivors’ organisations condemned the state and the Central governments for denying justice and a life of dignity to the survivors. They condemned Madhya Pradesh government for not constituting fast track court for cases related to gas victims and failing to generate employment.

However, police did not allow to torch photographs of PM Modi and CM Chouhan with Dow Chemical. The gas survivors torched effigy of Dow Chemical at abandoned Union Carbide Corporation (UCC) plant site.

Bhopal Group for Information and Action representative Rachna Dhingra said: “There are no standard treatment protocols for chronic diseases of lungs, heart, kidneys and the endocrine, nervous and immune systems caused by Union Carbide’s gases. Because the government has stopped all research on the health impact of the disaster, it is Union Carbide alone that has all the medical information and the corporation is still claiming them to be trade secrets.”

She accused Prime Minister Narendra Modi of not holding Dow Chemical responsible for the worst industrial disaster, and instead preferring to dine with the CEO of the US firm. PM’s action of “pleading” with Dow Chemical CEO Andrew Liveris to invest more in India is “outrageous and disgusting” for citizens, she added.

Meanwhile, Bhopal Gas Peedit Mahila Udyog Sanghthan paid tribute at Yadgar-e-Shahjahani Park to those who died in Bhopal gas tragedy. Speaking on the occasion, Congress MLA Arif Masood said there should be proper medical treatment for gas victims who are still moving from pillar to post for compensation. “We will continue our fight for justice to gas victims. State government should start closed units of stitching centres,” he added.

Bhopal Gas Peedit Sangharsh Sahyog Samiti convener Sadhna Karnik said: “We have to involve children in this fight for justice as even after 37 years, government is not working to fulfil demands like compensation, medical treatment and employment is concerned.’

Centre of Indian Trade Unions general secretary Pramod Pradhan said: “We have to continue struggle for justice. We have won in case of farmer stir and government had to withdraw farm laws. Similarly, we want to intensify the fight for gas victims.’

nextMr Prashant Kishor, Yours and BJP’s Performance is not Much Better Than That of Congress