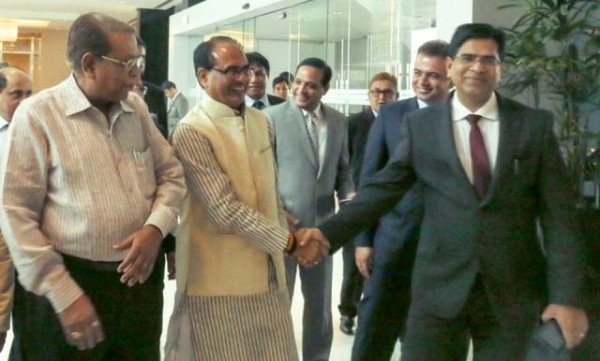 Bhopal: The Bharatiya Janata Party ruled Madhya Pradesh Chief Minister Shivraj Singh Chouhan, who is on a visit of UAE, called upon Dubai-based Non-resident Indians (NRIs) at an interactive session to avail benefit of immense investment opportunities in Madhya Pradesh. He also invited the NRIs to Global Investors Summit at Indore in October. The investors present on the occasion evinced keen interest in investment in Madhya Pradesh. Almost all assured the Chief Minister to participate in Global Investors Summit in Indore in October.

According to an official spokesman at the interactive session organised by Gulf Petrochem, the Chief Minister dwelt at length on progress of Madhya Pradesh during the last 10 years. He informed that as a result of these development works, image of Madhya Pradesh has changed. The state once known for Chambal ravines, dacoits, backwardness and poverty is now maintaining double-digit growth rate.

Chief Minister Chouhan informed that Madhya Pradesh’s agriculture growth rate is 24.99 per cent. The state is now witnessing speedy industrialisation. Concrete efforts are afoot to change state’s economy from agriculture-based to manufacturing-based. He expressed the determination to develop Madhya Pradesh as the best state in the world. He sought NRIs’ cooperation in realization of this resolve.

The Chief Minister said that the state government has implemented a progressive industrial policy to promote industries. The state government is committed to making available all possible facilities easily to investors. He informed about investment opportunities in agriculture, automobile, engineering, healthcare, industrial infrastructure, information technology, pharmaceuticals, renewable energy, technical education & skill development, textiles, tourism and urban development sectors in Madhya Pradesh. He informed that a land bank of 20,000 hectares has been made in the state to provide land to industrialists.

The Chief Minister gave replies to the questions asked by prospective investors and businessmen and satisfied their curiosities.

At the interactive session, Industries Minister Mrs. Yashodhara Raje Scindia invited investors to invest in Madhya Pradesh enumerating facilities and concessions being given to industrialists in the state.

Meanwhile, at Dubai’s Hotel Crown Plaza, Chief Minister Chouhan gave information about Global Investors Summit at Indore in October in the presence of large number of Dubai’s noted industrialists, investors and distinguished citizens. He specially underlined charismatic achievements of Madhya Pradesh in infrastructure development and agriculture sectors. He hoped that Global Investors Summit will turn out to be a milestone for state’s industrial development and creation of job opportunities for youths.