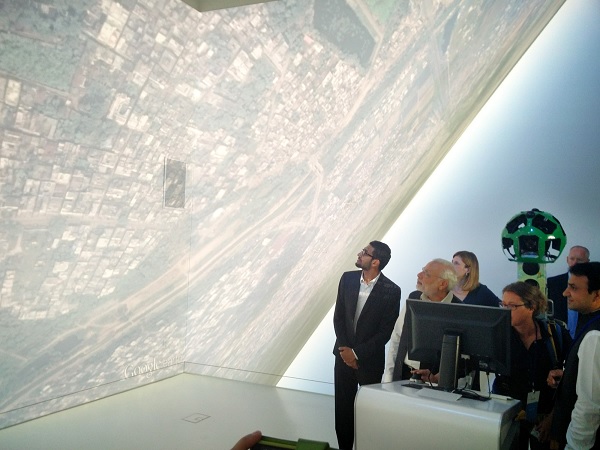 San Jose:(IANS) Prime Minister Narendra Modi on Sunday chaired a roundtable on renewable energy with top energy CEOs and experts during which he emphasised India’s commitment to realize the vision of 175 GigaWatts of clean energy by 2022.

At the roundtable, which was also attended by US Energy Secretary Ernest Moniz, Modi gave an overview of initiatives undertaken in India in the area of renewable energy, such as Kochi airport becoming a solar-powered airport and solar panels being installed over a canal in Gujarat as another example of the use of renewable energy.

He said that early next month, a district court in the tribal belt of Jharkhand will become entirely solar-powered. Modi also mentioned coal gasification as an important area of research. He expressed confidence of a renewable energy revolution over the next decade, said an official statement.

Modi said there is massive scope of investment in the clean energy sector, for example, through the Railways, where 100 percent FDI has been allowed. He said the government is working to address issues in regulation, and address the financial health of Discoms.

Besides, Moniz, the meeting was also attended by Prof. Steven Chu, former US Secretary of Energy.

Among the views expressed at the roundtable, was a clear assertion that India has the makings of becoming the “clean energy world capital”.

The participants said that clean and renewable energy will soon be an inexpensive energy option, with electricity storage becoming cheaper.

Participants were of the view that states and cities in India should be allowed to take the lead in clean energy initiatives. A related thought was that the current grid is not designed for carrying the 175 GigaWatts (GW) of renewable energy that India is targeting, and therefore a complimentary effort is required on the grid side.

Private investment was emphasized as vital for realizing the vision of 175 GW, with a parallel example being given of how Israel had solved its water shortage using private investment, said the official statement.

Experts were of the view that India has to address issues in four key areas – viz. technology integration; finance; regulatory frameworks; and the right talent pool. They also expressed concern at the financial status of power distribution companies (Discoms) in India.

The CEOs present gave a brief overview of the technologies and innovations being used in their companies. In addition to solar and wind energy, biomass was also suggested as a key provider of clean energy.