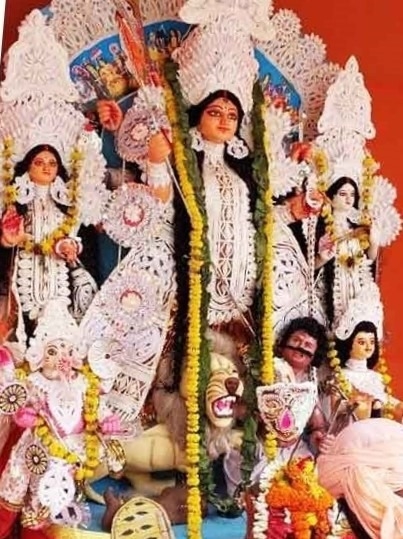 The Akhil Bharatiya Hindu Mahasabha at Kasba in the southern outskirts of Kolkata, on Monday modified the Mahatma Gandhi-like idol of Mahishasura in the face criticism.

Kolkata, Oct 3,2022:  The Akhil Bharatiya Hindu Mahasabha at Kasba in the southern outskirts of Kolkata, on Monday modified the Mahatma Gandhi-like idol of Mahishasura in the face criticism.

A section of the opposition parties as well as the social media created a major hue and cry over the issue. The police intervened and late on Sunday evening, the organisers finally brought in the said changes.

However, even that change was not free of controversies leaving the organisers aggrieved. Chandrachur Goswami, one of the Puja organisers, alleged that the changes were made forcefully by the local police from Kasba Police station. “It was the police who removed the spectacles and attached a wig and moustache on the idol. We received threatening calls. The police threatened us to close down our Puja and ultimately, we had to accept the changes. But our protests will be on,” he said.

A section of the Puja organisers reportedly wished to remove the idol of Mahisasura altogether as a mark of protest. But ultimately, they decided to continue with the changed look for the sake of traditional rituals which are incomplete without the demon’s presence.

Meanwhile, a complaint has been filed against Goswami at the local Kasba Police Station. However, Goswami is not disturbed by that and he said that he will take up the matter legally.

Currently pursuing his Ph.D in environmental science, Goswami also contested as an independent candidate against chief minister Mamata Banerjee in the 2021 by-elections from Bhabanipur Assembly constituency.

However, he secured the eighth position in that poll securing just 81 votes, which include four post- ballot votes.