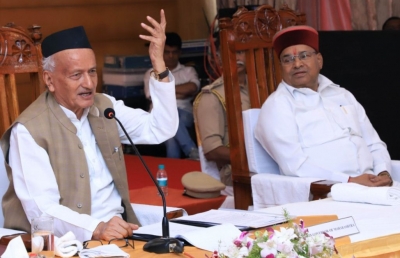 In a major initiative, the Governors of Maharashtra and Karnataka met in this Maharashtra town on Friday to boost cooperation in the border districts of the two adjoining states.

Kolhapur (Maharashtra), Nov 4,2022:  In a major initiative, the Governors of Maharashtra and Karnataka met in this Maharashtra town on Friday to boost cooperation in the border districts of the two adjoining states.

Maharashtra Governor Bhagat Singh Koshyari and his Karnataka counterpart Thaawarchand Gehlot held the meeting along with Collectors and Superintendents of Police of 9 border districts – five of Maharashtra and four of Karnataka – at the Residency Club here this afternoon.

The meeting, held at the behest of Prime Minister Narendra Modi, assumes significance in view of the sentimental and long-pending boundary dispute between the two states that creates regular political friction.

“There is good coordination between the border districts of the two states and this meeting will definitely be beneficial in the future. The state governments will be informed about the problems that need to be resolved at the state-levels through discussions among the officials on both sides,” said Koshyari.

“The meeting was satisfactory.. As per the discussions held today, all the concerned administrations should create better coordination among each other and try to get the government schemes’ benefits to the citizens living in the area,” noted Gehlot.

The Collectors and SPs also made their presentations at the meeting and along with the deliberations outcome, all the inputs would be compiled and sent to the Raj Bavans of the two states which would act further.

Kolhapur Collector Rahul Rekhawar said that as per the meeting held on June 26, 2020, it was decided that the water levels in the Almatti Dam should be around 517-517.50 metres to reduce the impact of floods from the Krishna River.

The participants also felt that the Excise Departments of both the states need to coordinate more with each other to prevent illicit liquor trafficking from Goa by thoroughly inspecting vehicles on the Shinoli, Sankeshwar, and Kognoli routes.

Other major points discussed were steps to curb the incident of lumpy skin disease in the cattle of the two states, easier trade and market for cattle fodder, the problems of migration of elephants from Karnataka to Maharashtra, growing animal-human conflicts, compensation to victims of Covid-19 from Kolhapur who died in Karnataka and stringent implementation of the PCPNDT Act to stop illegal sex determination tests in the border areas.

previousWith over 1300 job offers, placement at IIT-Delhi breaks all records