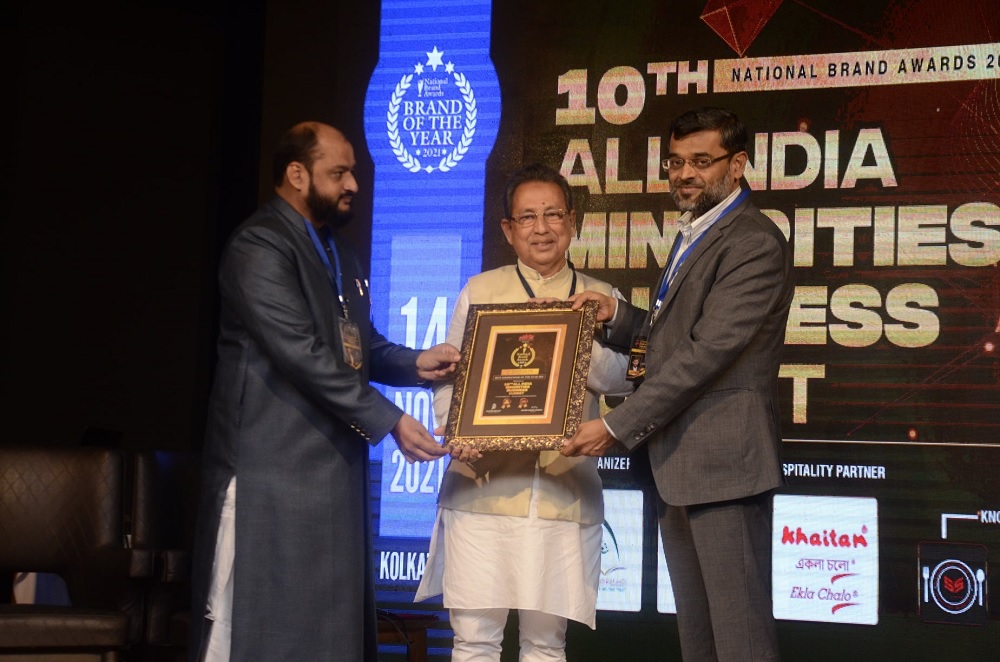 In recognition of his tireless commitment to the educational empowerment of minorities, M Nurul Islam, founder of Al Ameen Mission, Kolkata, has been conferred the Best Eduprenuer of the Year 2021 award at the 10th All India Minorities Business Summit & National Brand Awards, held in Kala Kunj, Kala Mandir, Kolkata on November 14, 2021.

Receiving the award from the hands of Dr. Aslam Khan, founder Chairman, Octaware Technologies Limited, M Nurul Islam expressed his gratitude to the Maeeshat Media for finding him deserving for this honour and felt the award would further strengthen his resolve to work towards the educational as well as socio-economic upliftment of minorities.

M Nurul Islam’s journey began in 1986 when he started coaching seven students in all in a small room of a Madrasa where he was working. Fuelled by the desire to bring about tangible changes in the life of economically disadvantaged sections within the minorities Nurul Islam then renamed his coaching hostel into Al Ameen Mission in 1987.

The number of students increased to 11 in 1993 and out of which four became doctors and four engineers. It convinced Islam that he was on the right path, and ever since, he has never looked back.

Today the Al Ameen Mission, which has its main campus in Khalatpur, Howrah district, 80Km from Kolkata, has expanded into at least 15 districts in West Bengal with more than 56 branches educating and guiding nearly 120,000 residential students to achieve excellence in their personal, professional as well as social lives.

Nurul Islam has made sure that students from all strata of society, irrespective of their financial background, get modern, quality education in a fully residential system following Islamic values and principles.

Al Ameen Mission offers a conducive atmosphere for all students to learn and excel, allowing total fairness, equity, equality, and transparency with preferences to the poor and deserving students. In fact, it has reserved 25 percent of seats for the poor, destitute, and orphans, for which finance is arranged mostly through donation and zakat.

Al Ameen Mission also runs residential coaching classes for the engineering and medical aspirants across the state and neighbouring states like Assam, Bihar, Jharkhand, and Tripura.

Besides education, Al Ameen Mission is engaged in charitable works within the community as well. It provides loans to unemployed Muslim youths and runs several scholarship programmes for needy students from other communities.

Thanks to Nurul Islam’s unwavering dedication and clear vision towards bringing quality education within the bounds of the poor, thousands of his students are now serving the nation in the capacity of doctors, engineers, researchers, administrative officers, professors, and teachers.

Nurul Islam is often referred to as Sir Syed of West Bengal for his stellar role in revolutionizing the concept of education among one of the most underprivileged communities living in one of the most backward regions of the country. 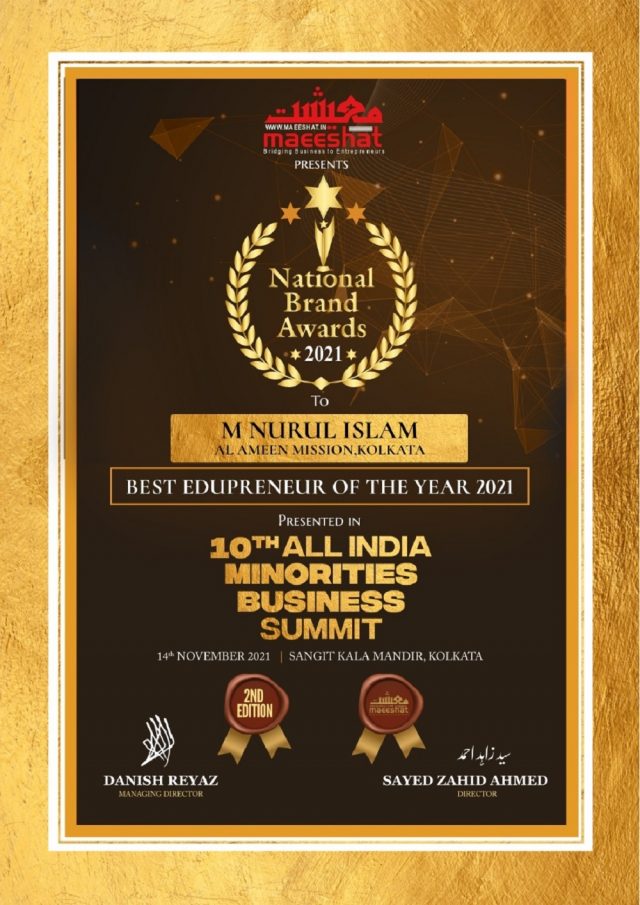 Apart from the Maeeshat Best Eduprenuer of the Year 2021, Nurul Islam has several other awards under his belt, including The Telegraph School Award for Excellence (2002 & 2009), The Telegraph School Award for the best academic performance in competitive examinations (2004),  The Certificate of the Honour (2005, 2006 & 2008), and Begum Rokeya Puraskar of West Bengal Board of Madrasa (2010).

In the recent past, he was also awarded the prestigious Banga Bhusan Award (2018) from West Bengal’s Chief Minister Mamata Banerjee.