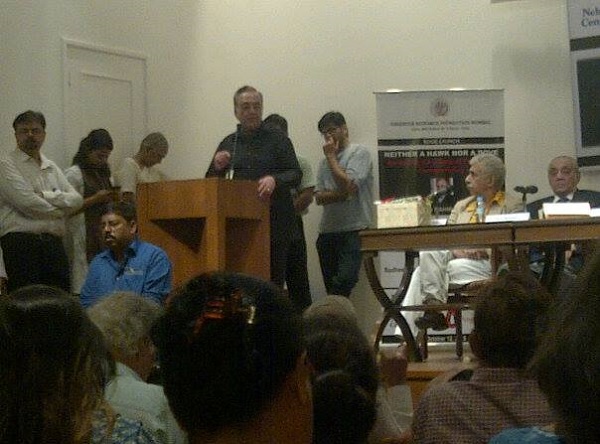 The incident created a nationwide outrage with condemnation from all major political parties including the state’s ruling Bharatiya Janata Party, which is in alliance with the Sena in both the centre and in Maharashtra.

Taking the Sena’s challenge headlong, Chief Minister Devendra Fadnavis had assured that the function would be held and full security would be provided to the event and the visiting dignitary.

The state government ensured tight security at the venue, Nehru Centre in Worli, where “Neither a Hawk Nor a Dove: An Insider Account of Pakistan’s Foreign Policy” was released peacefully without any untoward incident in the presence of a large number of dignitaries from different walks of life.

The attack happened earlier in the day as Kulkarni was leaving his home in Sion in south-central Mumbai.

A group of around a dozen Sena slogan-shouting activists accosted him, asked him to cancel the event and then smeared him with black ink.

A shaken but determined Kulkarni, chairman of think-tank Observer Research Foundation (ORF), told media persons that the Shiv Sena had repeatedly warned it would not permit the event and if the ORF failed to comply, the party would disrupt it in “Shiv Sena style”.

“The Shiv Sena has no authority to impose such a ban… We have taken a principled stand and shall not cancel the event,” asserted Kulkarni, who did not wash off the ink for several hours,

Kasuri said he was “saddened and unhappy by this attack on Kulkarni whom I have known for many years” and condemned it. “…the right to protest must be peaceful and these people must change their tactics of protest,” he said at a hurriedly convened press conference here following the incident.

“I have come with a message of peace… An overwhelming majority of people in both countries want peace between the two countries… But, there are some who don’t want India-Pakistan peace,” he said.

Senior BJP leader Advani in New Delhi and party spokesman minced no words in protesting against the Sena actions, while social networking sites condemned what many termed “Shiv Sena hooliganism”.

Though virtually isolated, the Sena appeared undeterred by the backlash and vowed to continue its anti-Pakistani protests in different forms.

“You have witnessed what is going on since today morning. Kasuri has arrived in Mumbai for the function arranged by Pakistai ‘agent’ (Kulkarni) – You have also seen the Shiv Sena’s reaction and how their faces have been blackened,” Shiv Sena MP and spokesperson Sanjay Raut told media persons.

“We are not concerned by who is condemning the action. Our agitation will continue. It is not a political agitation, but a patriotic one against the forces attempting to break and divide the country,” he said.

Warning the Sena would not tolerate any talks which was “anti-India” or “anti-Indians”, Raut said: “During his tenure as foreign minister, Kasuri worked actively against India. He invited anti-Indian separatists in Jammu and Kashmir and instigated them to unite against India. This is the same Kasuri whom they are welcoming with a red carpet.”

He said the Sena has sent a report listing all of Kasuri’s anti-India activities during his tenure as Pakistan foreign minister, and urged Fadnavis’ intervention to cancel Monday’s function.

The Monday incident came close on the heels of last week’s threats by Sena leading to cancellation of two concerts – in Mumbai and Pune – by renowned Pakistani ghazal maestro Ghulam Ali.

It came a day after the BJP virtually snubbed the Shiv Sena leadership by keeping them at bay during Prime Minister Narendra Modi’s visit to Mumbai to lay the foundation for three mega-projects – the Ambedkar Memorial, two new lines of Mumbai Metro and a new container terminal at Jawaharlal Nehru Port Trust.