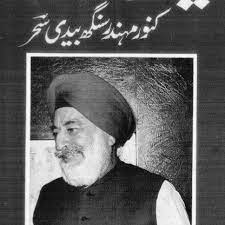 Paying tribute to the poet, Kerala Governor Arif Mohammad Khan, who was the Chief Guest at the event called him “a man with a big heart who felt compassion for everyone”.

Remembering the multifaceted personality with whom he spent his younger days, the Kerala Governor said he was an inspiration for generations who, through his poetry, spread the message of love and India-Pakistan peace.

The grandson of the poet, Ashwajit Singh shared: “He was very empathetic. His poetry reflects the combination of love and patriotism between people and nations. Poetry for him was larger than life and an integral part of his being.”

The poet was a bureaucrat by profession and his works invoked the idea of love, peace and Hindu-Muslim harmony in the backdrop of the Partition.

His poetry is considered to belong to the same trans-religious and trans-national tradition as that of other well-known poets like Qateel Shefai, Ahmad Faraz, Faiz Ahmad Faiz, Kaifi Azmi among others. He also started the famous ‘Bharat Kesri’ wrestling competition.

The evening commenced with a panel discussion that explored the significance of Kunwar Mohinder Singh Bedi’s poetry and belief in today’s political, social and cultural contexts.

This was followed by ghazal renditions by Minu Bakshi, Harsh Mahajan and Yash Gulati. Dancer Shivani Verma performed on songs penned by the poet and sung by Mohammed Rafi and Mehdi Hassan.