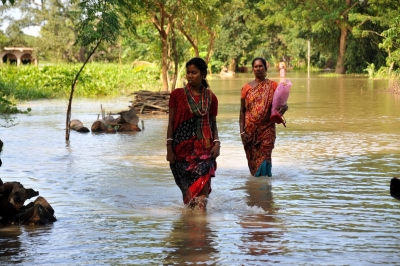 As confusion continues galore over the exact number of missing persons in the flash flood in West Bengal’s Jalpaiguri district, political mudslinging between the ruling and the opposition parties in the state started taking a nasty shape on Thursday.

Kolkata, Oct 6,2022:  As confusion continues galore over the exact number of missing persons in the flash flood in West Bengal’s Jalpaiguri district, political mudslinging between the ruling and the opposition parties in the state started taking a nasty shape on Thursday.

Eight persons have died and several others are missing after the flash flood in the Mal river at Malbazar in West Bengal’s Jalpaiguri district while thousands of people assembled for immersion of Durga idols on the Vijaya Dashami late on Wednesday.

There are two major issues that are resulting in eruption of such political slanders, the first being the exact or even tentative number of persons still missing following the mishap and the second being allegations of utter administrative mismanagement in absence of which the disaster could have been avoided.

Leader of the opposition in West Bengal assembly, Suvendu Adhikari has alleged that even after so many hours have passed, there had been no clarity on the details and number of missing persons.

Attacking Chief Minister Mamata Banerjee, Adhikari said that her task does not end with announcing compensation for the families of the dead and injured. “The chief minister should instruct the Jalpaiguri district administration to provide clarity on the number of missing persons immediately,” Adhikari said.

He also questioned why the chief minister should immediately come for a spot-visit and hand over the compensation cheques to the victims’ families as she had done after the carnage at Bogtui Village in Birbhum district in March this year killing ten persons.

“Those killed following the flash flood in Mal River were participating in the ritual of idol immersion. Is that a reason why they are of lesser importance?” the leader of the opposition questioned.

State’s North Bengal Development Minister, Udayan Guha made a counter- attack and claimed doing politics over bodies had always been the culture of Adhikari and other BJP leaders.