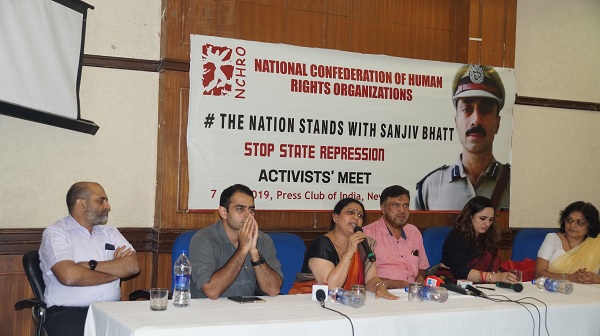 New Delhi: Taking head on power of the state, which indulges in hate and violence, is like putting one’s head in the lion’s mouth. This is what Sanjiv Bhatt, the jailed IPS officer in a nearly 30-year old case of custodial death and another 23 year old case, did despite continuous victimization following his deposition before the SIT and the Nanavati Commission investigating the 2002 Gujarat pogrom.

Sanjiv Bhatt did not back down, disappear in silence or seek a transfer; he continued to fight against the perpetrators of fear, hate and violence, no matter what the consequences. This is what Sanjiv Bhatt is, a man of immense honour and integrity, wife Mrs. Shweta Bhatt has asserted.

Mrs. Shweta said Sanjiv did his duty honourably and diligently, not buckling under political pressure, always following one single absolute — to live up to his highest values and never to a lesser standard, no matter how long or hard the struggle may be.

When an innocent man is implicated for a crime I believe he did not commit, you are not only persecuting him, but his entire family, Mrs. Bhatt exclaimed.

However, it seems Mrs. Shweta is not subdued at all by the power of the state. She stands boldly and solidly behind her husband Sanjiv and is determined to fight tooth and nail against the powers that be. She has unhesitatingly given a clarion call to one and all to unite against the state oppressors till the finish.

Mrs. Shweta was throwing light on Sanjiv’s victimization while addressing Activists’ Meet organised by the rights forum, National Confederation of Human Rights Organizations, (NCHRO), at the Press Club of India in New Delhi, on Sunday on the topic “The Nation Stands with Sanjiv Bhatt: Stop State Repression”.

Terming the imprisonment of Sanjiv Bhatt as “State repression”, social activists from across the country have demanded the release of jailed IPS Officer Sanjiv Bhatt.

Mrs. Shweta narrating the woes befallen on the family, while holding her tears back, said 27 years of his husband’s dedicated service was rewarded by persecution, victimisation and vindictiveness — all this, because he dared to speak up against a certain regime.

Meanwhile, the official sources reportedly said Mrs. Shweta was spreading “blatant falsehoods and trying to create a false impression about absence of fair trial in the case”

The case is related to the custodial deaths of Prabhudas Vaishnani, who was among 133 people caught by local Jamnagar police after a communal riot broke out following a bandh call in view of BJP leader L K Advani’s Rath Yatra.

Continuing, Mrs. Shweta revealed how fast track justice became fast track injustice when Sanjiv Bhatt in about record 18 days time was convicted for a crime he had not committed. Firstly, she said her husband had “neither arrested nor detained anyone as he was not empowered to do so. Secondly, Prabhudas died 18 days after he was detained. He never complained of torture before the magistrate or anybody else.”

She called her husband’s conviction a “miscarriage of justice”, and claimed that he had been “implicated in a fabricated case”. She claimed that the complaint filed against her husband was a “classic case of political vindictiveness”.

“It was not the family of Prabhudas but a member of the Vishwa Hindu Parishad, Amrutlal Madjavji Vaishnani, who filed a complaint of custodial torture,” she claimed.

Meanwhile, on exhaustive investigation about the custodial death, taking into cognisance medical, post-mortem and specialist reports of the victim, it was concluded that there was no evidence found against Sanjiv and that he had performed his duty with utmost sincerity. Thereby, the home department, Government of Gujarat, refused sanction to prosecute — and protected Sanjiv and the other officers in right earnest till 2011.

Following Sanjiv’s deposition regarding the 2002 riots of Gujarat, there was an immediate withdrawal of the revision application filed by the state of Gujarat protecting the officers — instructions were reportedly given the very next day to start the immediate prosecution of Sanjiv.

To my mind, there cannot be a more blatant example of vindictive persecution of a totally innocent man who did nothing but perform his duty in an outstanding and exemplary manner during the most difficult phase of communal rioting, Mrs. Shweta opined.

It may be recalled here that fresh out of the academy, Sanjiv Bhatt had taken charge as ASP Jamnagar in October 1990. On 30th October 1990, following the stopping of LK Advani’s Rath Yatra and his subsequent arrest, there was an outbreak of uncontrolled communal riots across in Jamnagar. Following the declaration of a Bharat Bandh by the VHP and the BJP, further outbreaks of violence were anticipated in communally sensitive states across the country. Despite the declaration of a curfew on 30th October 1990, various uncontrolled incidents of communal rioting were reported in Jamjodhpur. In all 133 rioters from these incidents were arrested by the local PSI and his team in connection of TADA.

The deceased Prabhudas Vaishnani and his brother Ramesh Vaishani were one of the 133 rioters arrested for indulging in communal violence and arson. The 133 rioters were arrested by the Police Inspector of Jamjodhpur and his team between 9:30 AM and 12:15 PM and were subsequently kept in his custody in connection with the TADA case. Sanjiv and his team had arrived at the Jamjodhpur police station at 1:30 PM — long after the arrest by the local police.

At no point of time was the deceased arrested by Sanjiv, nor was he in his custody or was ever interrogated by him — furthermore, not once did the deceased ever complain of ill-treatment, grievance or torture while being presented to the Judicial Magistrate court, while in custody or after being released from custody on bail. No injuries or evidence of mistreatment was apparently observed. Prabhudas Vaishani passed away 10 days after being released from custody on bail. The hospital records as well as the forensic post-mortem records noted that there was no internal or external indication of any injury/torture or any grievance. A complaint of custodial torture was made by one Amrutlal Madjavji Vaishnani, reportedly an active member of the VHP/BJP, after the demise of Prabhudas Vaishnani.

Sanjiv in Palanpur jail in another case

Shweta Bhatt said her husband was arrested on September 5th, 2018 and is in jail in the Palanpur case which is 23 years old and “in his absence, the proceedings in the first case (of custodial death) were expedited”.

Mrs. Shweta said according to Section 161 of the Bombay Police Act, a government officer can be prosecuted within 1-2 years of the commission of any offence and not after 23 years.

In the Palanpur case, Sanjiv Bhatt was accused of planting drugs to implicate a Rajasthan based-lawyer. The former IPS officer has been in jail since September 5, 2018 in connection with the Palanpur case at the time of his sentencing in the 1990 case.

Earlier, speaking on the occasion Mrs. Shubhashini Ali, president of All India Democratic Women’s Association, (AIDWA), said: “Keep the religion and politics separate. We should unite for the sake of saving the Constitution not only for Sanjiv Bhatt but for one and all”.

“We should coordinate in a systematic manner to get justice. Not only Sanjiv Bhatt but also for the suppressed classes. It is time for struggle and not to maintain silence to be mute spectator”, said E.M. Abdul Rahiman, the Chairman of Empower India Foundation, while concluding the session.

Later in the afternoon Mrs. Shweta addressed a Press conference at the same venue where she said: “It is the case of fast track injustice by the court of law which is very unfortunate”. Just because, Sanjiv spoke truth in front of the Nanavati Commission about the perpetrators of 2002-Gujarat pogrom, he is being which-hunted. It is the only reason for the Modi regime to target him.

Mrs. Shweta continued: “I want my Sanjiv back home. They have political power to oppress the voices of dissent. We want people’s power to get justice. It is not the issue of Sanjiv’s family alone but for one all. Today it is Sanjiv while tomorrow it can be anybody among us. Come out on the streets. We have to be loud, clear and bold as well raise our voice louder for justice”, she appealed to the nation.

Meanwhile, Shantanu, who is son of Shweta and Sanjiv Bhatt, said: “We wonder that the high profile criminals such as Babu Bajrangi, Maya Kodnani and so on were very leniently given bail by the courts of law. Then why not to my father, who served for the nation. If the stage managed injustice prevails at all levels, where do we go? That’s why we come to the people; come to the media. We don’t want any favour from the justice delivery system; we want justice to be served to us in a fair manner”.

“There is no iota of evidence in the case in which Sanjiv was convicted. The conduct of the case is arbitrary, unjust and unfair” Adv. K.P. Mohammad Shareef, vice-chairperson of NCHRO, remarked.