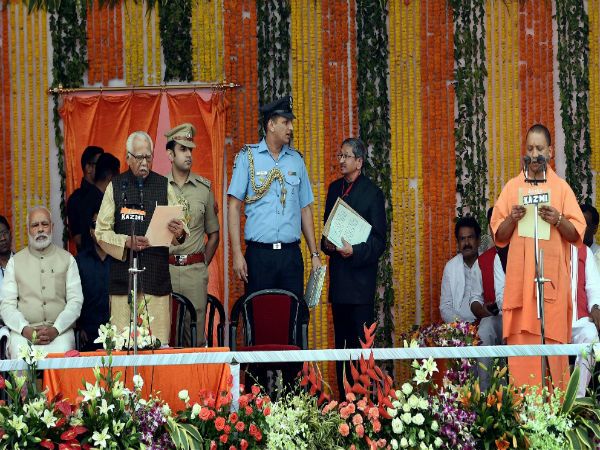 Lucknow : Is Uttar Pradesh Chief Minister Yogi Adityanath — in power for just over a year — fast losing his lustre?

Many here feel so.

A litany of complaints about his public conduct, his behaviour with colleagues as well as common people is fast eroding the aura he had built up as the five-time Lok Sabha MP from Gorakhpur who was catapulted to the Chief Minister’s office of a socially diverse and politically volatile state of 220 million people.

Last week, 24-year-old Ayush Bansal shocked many when he broke down in front of media in Gorakhpur and disclosed how the monk-turned-Chief Minister mocked him during a “junta darbaar” where he had gone to complain about a land-grab case in which independent legislator from Nautanwa, Amanmani Tripathi, was involved.

He also accused the Chief Minister of calling him “awaraa” (wayward) and pushing him while throwing his file in the air. “Maharaj ji angrily snapped at me and said my work will never be done and that I should get out of his sight,” Bansal told IANS.

While officials got down to damage control and said the matter was being looked into, the fact that Adityanath behaved in a manner unbecoming of a Chief Minister was neither contradicted by officials nor denied by the ruling party.

Barely had the din over this episode died down when two MPs of the ruling Bharatiya Janata Party (BJP) complained of similar behaviour. In a letter to Prime Minister Narendra Modi, BJP MP from Robertsganj Chhote Lal Kharwar, accused Adityanath of “scolding him and asking him to get out”. The MP said he was deeply pained at the behavior of the Chief Minister as he tried to draw his attention to issues faced by the party faithful.

“Never did the local administration listen to my plaints and when I went to meet the Chief Minister twice over many issues, ‘unhone mujhe daantkar bhaga diya‘ (he scolded me and chased me away),” the lawmaker said in his letter.

The BJP leader has also shot off a letter to the National Commission for Scheduled Castes and Scheduled Tribes, seeking help. Lal also says that definite proof of wrong-doing and corruption presented by him went unheard and unaddressed.

What is surprising is that all this happened to a man who is the state president of the BJP’s SC/ST Morcha.

While Modi is learnt to have assured Lal of action, there are other similar murmurs about Adityanath’s rough behaviour. Etawah MP Ashok Dohre has also written to Modi accusing the state police of lodging fake cases against SCs and STs during the Bharat Bandh. When asked why he did not petition the Chief Minister, Dohre said he considered Modi his leader, and thus petitioned him.

Alarmed by the sudden “unease” among the party’s lawmakers, Amit Shah summoned Yogi to New Delhi over the weekend and is learnt to have asked him to mend his ways. Adityanth also met Modi. Interestingly, Deputy Chief Minister Keshav Prasad Maurya, who party insiders admit doesn’t see eye to eye with Yogi, was also called to Delhi at the same time.

Ironically, till not long ago, the 45-year-old Chief Minister was being venerated by the party faithful as a man next only to Modi. Insiders, however, now admit that not only has Adityanath failed to show his “pakad” (hold) on the party, but is also “awkwardly arrogant in his public conduct”, and not very able in his administration.

“He may be a busy man, so have been his predecessors… he remains inaccessible and uses foul and unacceptable language at times,” conceded a senior minister who did not wish to be named. Though stopping short of calling the Chief Minister arrogant, he suggested that “Yogi-ji is better advised to be more courteous and improve his time management”.

A senior party functionary too noted “the changing ways of Maharaj-ji”, though he felt “mood swings and the tongue-lashings could be because he has to handle a big state like Uttar Pradesh”.

A senior bureaucrat also alleged that the Chief Minister often “goes off the handle” and could be very acerbic in his dealing with officials.

The Chief Minister’s loyalists, however, point out that he does not like people to hang around him and wants officials to deliver fast and work within the system that has been set up. When there is any breach, he loses his temper, a close aide told IANS.

His failure to deliver on his promise to get all pot-holed roads fixed by a given deadline last year; the rollback — under pressure — in privatisation of the power sector in five cities; the poor showing in the Phulpur and Gorakhpur Lok Sabha by-polls and reports that he and his deputy, Keshav Prasad Maurya, don’t get along well have already rung alarm bells in the establishment, sources said.

(Mohit Dubey can be contacted at mohit.d@ians.in)