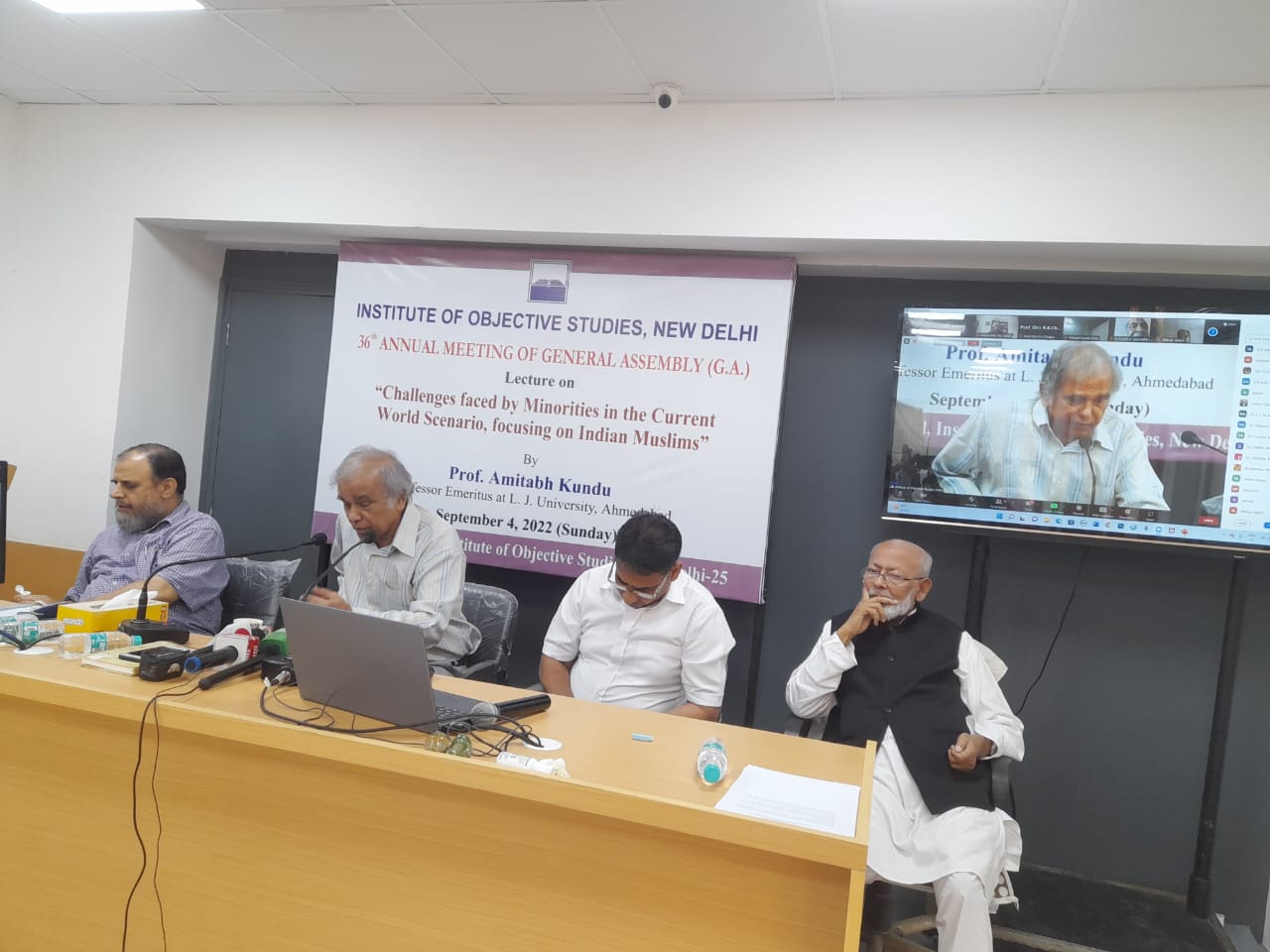 NEW DELHI – “At present share of India in the global economy is only 8 per cent out of 18 per cent of total population share of the world. However, by 2050 Indian share will be 29 per cent. It will be much larger economy even more than China. This has been endorsed by Asian Development Bank, (ADB), and World Bank.”

“However, if the two critical assumptions such as equal access to all in Labour Market and equality in Skill Development are not made available to different social groups then certainly the dream projection of a most powerful nation would not be achieved. For this in the labour market access has to be given to all men & women, SCs and non-SCs, STs & non-STs, all religious Minorities etc. Similarly, in Skill Development if inequality among various social groups is not minimised then the projected growth will not be accomplished”.

The above observations were made by well-known intellectual Prof. Amitabh Kundu, Professor Emeritus at L. J. University, Ahmedabad, while delivering a lecture here on “Challenges faced by Minorities in the Current World Scenario, focusing on Indian Muslims” which was organized by the established think-tank Institute of Objective Studies, (IOS).

Prof. Kundu, a retired JNU faculty and Chairman of the Post-Sachar Evaluation Committee, said that India is certainly looking up. It will overtake China in terms of share in GDP. However, there are some catches and assumptions. Putting up a mathematical model ADB in Manila said 21st Century belongs to Asia, to India. This has been predicted by economists, he said.

According to late Angus Madison, the Economic historian, Asia’s share in economy was 58 percent in 1700. But continuously sliding downwards sharply it came down to 12 percent in 1961. While as per Bloomberg Foundation analysis the projection now is that by 2050 Asia’s share would reach 50 percent. Indian recovery is much sharper as it is doing much better than most of the Asian countries except one or two. Our income growth has become better even than China also. If we are able to maintain our growth tempo with our structural parameters being very much strong, India will certainly going to come up, he said.

He said that in the last 7-8 years or a little earlier to this the HDI (Human Development Index), has not been growing well as it was growing two decades ago prior to this. The UNDP (United Nations Development Programme) brings out report of HDI every year where it is now seen that India’s growth is very less while other countries it has become half. Earlier, India’s growth used to increase 2 percent but now it is less than 1 percent.

India dropped to rank 132 out of 191 countries in the 2021 HDI report. It has declined two years in a row – 2020 and 2021. It is a matter of concern. There are three things that come under HDI viz. (i) Education, (ii) Health and (iii) Average Income. Inequality to access Education and Skill Development is very high and unless we address it the whole dream of India becoming a 10 Trillion economy will be a farfetched goal, he opined.

Education among Muslims up

Meanwhile, Prof. Kundu also revealed that the rate of education among Muslims has increased but the rate of education of women is very low. Even today the dropout rate of Muslim girls is very high, he said. He also said that Muslims have the highest dropout rate in education, 50 percent of it is due to economic hardship, and the rate of economy is not good for Muslims. In rural areas, the overall situation of Muslims has improved compared to Dalits and OBCs. The death of children up to the age of 5 years is less among Muslims.

The lecture was presided over by IOS vice chairman Dr. Afzal Wani. It should be noted that this lecture was organized on the occasion of the General Assembly meeting of the IOS.

In the meeting the past performance of IOS was reviewed, the name decided by the Committee for Lifetime Achievement Award was confirmed; the report of Shah Waliullah Award was presented. It was decided to further increase research activities in the coming years.

previousWorkshop on Recent Treatment of Osteoarthritis held at USTM