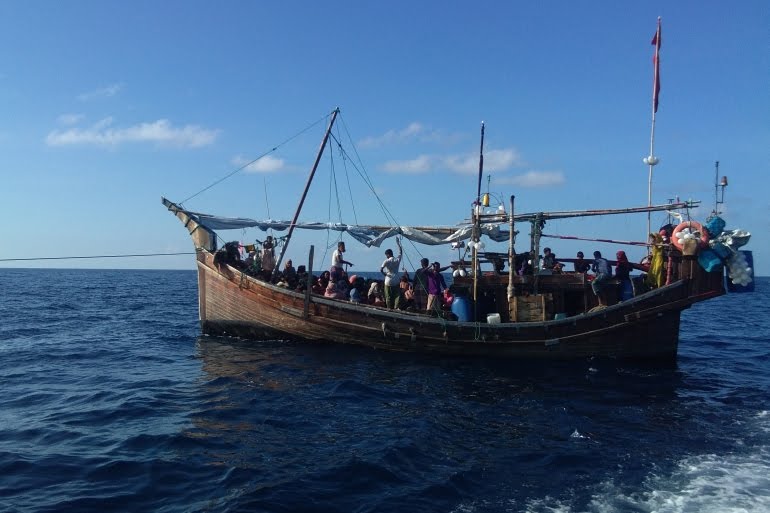 Indonesia has announced it will allow a boat packed with Rohingya refugees, which had become stranded off its coast, to dock after calls from aid organisations and rights groups to allow the vessel to seek refuge.

“Today, the Indonesian government decided, in the name of humanity, to give refuge to Rohingya refugees currently afloat on a boat near Biereun district, Aceh,” Armed Wijaya, an official at Indonesia’s chief security ministry, said in a statement on Wednesday.

The boat was first sighted in the waters off Bireuen, a district in Aceh province, on Sunday. Based on photos and reports from local fishermen, the passengers on the packed boat were overwhelmingly women and children.

Earlier Indonesia had said on Tuesday that they would provide the roughly 120 passengers on board with food, medicine and water, but would not allow them to seek refuge in the Southeast Asian country. Soon after, many organisations including the UN refugee agency called for the immediate, life-saving disembarkation of a group of Rohingya refugees in distress at sea off the coast of Indonesia.

“The decision was made after considering the emergency conditions the refugees are experiencing onboard the boat,” Wijaya said. Its passengers were mostly women and children, he added.

Since August 2017, more than 700,000 Rohingya Muslims fled from Buddhist-majority Myanmar to camps in Bangladesh when the Myanmar military launched a clearance operation in response to attacks by a rebel group. Myanmar security forces have been accused of heinous crimes, including mass rapes and burning thousands of homes.

Rohingya have faced violence, persecution and forced displacement for decades.