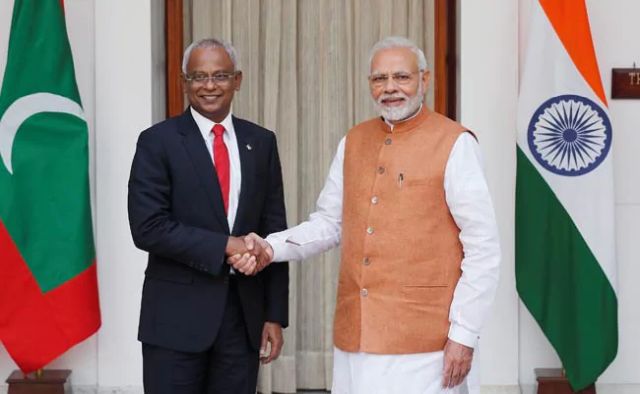 New Delhi : India and the Maldives on Monday agreed to deepen cooperation to maintain peace and security in the Indian Ocean region as New Delhi extended lines of credit worth $1.4 billion to the archipelago nation following delegation-level talks between Prime Minister Narendra Modi and Maldives President Ibrahim Mohamed Solih here.

The two sides also signed four agreements, including on cultural cooperation, IT and electronics cooperation and on improving the ecosystem for agribusiness.

“President Solih and I agree that to maintain peace and security in the Indian Ocean region, we need to deepen our cooperation,” Modi said while jointly addressing the media with Solih after the talks.

“Both India and the Maldives share equal interest and stake in the development and stability of our region,” he said.

Stating that the security interests of the two countries are related to each other, Modi said that there is also unanimity on the sustainability of this region and to be conscious of each other’s interests and concerns.

“We will not allow the use of our countries to harm each other,” he said.

“I want to work together with President Solih for the bright future of our region, and utilise all possibilities in the relationship between India and Maldives.”

According to a joint statement issued following the talks, both leaders agreed to strengthen cooperation to enhance maritime security in the Indian Ocean region through coordinated patrolling and aerial surveillance, exchange of information and capacity building.

“The two leaders reaffirmed their unwavering commitment and support for increased cooperation in combating terrorism in all its forms and manifestations both within the region and elsewhere,” it stated.

The Prime Minister hailed Maldives’ decision to re-join the Commonwealth and welcomed the country as the newest member of the Indian Ocean Rim Association.

In his address, Modi also said that India is proud that the Maldives has become a medium income country from being a least developed country.

“The Maldives achieved this despite facing the challenges of sustainable development and climate change,” he said.

“In resolving these challenges, and in the sustainable development of marine resources, the role of Maldives will be important throughout the world.

“Therefore, we agreed to increase mutual cooperation on the various aspects of maritime cooperation between India and the Maldives.”

The Prime Minister said that India will always with be the Solih government in its efforts to carry out ambitious plans for changing the lives of the people of Maldives, and to give a human face to development in the country.

“I am glad that as a direct expression of this commitment, for the socio-economic development of the Maldives, India will extend budget support, currency swap and concessional lines of credit worth $ 1.4 billion,” he said.

Modi also called for boosting connectivity between India and the Maldives saying that better connectivity will lead to exchange of goods and services, information, ideas, culture and people.

In this connection, Modi offered additonal 1,000 seats in India for Maldivian nationals for training and capacity building.

“I welcome the growing opportunities for investment by Indian companies in the Maldives,” he said.

According to the joint statement, both leaders agreed to promote closer economic cooperation in sectors such as fisheries development, tourism, transportation, connectivity, health, education, information technology, new and renewable energy and communications.

On his part, Solih said that during the discussions, both sides reaffirmed their commitment to democracy.

“We agreed on the mutual need for regional stability and security in the Indian Ocean,” he said.

According to the statement, Solih reaffirmed his government’s India-First Policy, and commitment to working together closely with India.

“He appreciated the generous assistance provided by the government of India to Maldives, and identified various areas for developmental cooperation, including private sector involvement in development of housing and infrastructure, water and sewerage systems in the outlying islands, healthcare, education and tourism,” it stated.

In his address, Solih said that he has invited both President Ram Nath Kovind and Modi to visit the Maldives next year

Earlier in the day, Solih was accorded a ceremonial welcome at the Rashtrapati Bhavan during which Modi greeted him with a hug.

External Affairs Minister Suhma Swaraj also called on the visiting dignitary and discussed all aspects of the bilateral ties.

Solih arrived here on Sunday on a three-day visit to India, his first foreign visit since assuming office on November 17.

Relations between India and the Maldives deteriorated after Solih’s predecessor Abdulla Yameen imposed an internal emergency in February this year. Yameen was also seen as leaning towards China sidelining India.

Solih defeated Yameen in the elections in September to take over as President.