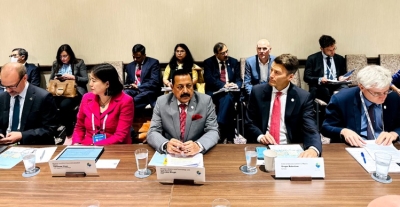 Twenty-three national governments, including India and the UK, and the EU, collaborating through Mission Innovation (MI), on Friday announced that they will coordinate to deliver 221 demonstration projects globally in this decade to accelerate clean energy technologies in the hardest to abate sectors.

Pittsburgh, Sep 23,2022:  Twenty-three national governments, including India and the UK, and the EU, collaborating through Mission Innovation (MI), on Friday announced that they will coordinate to deliver 221 demonstration projects globally in this decade to accelerate clean energy technologies in the hardest to abate sectors.

The announcement, made at the Seventh MI ministerial meeting in Pittsburgh, will drive public-private investment in technologies which need to be commercialised by 2030, including at least 50 large-scale demonstration projects to decarbonise energy-intensive industries like steel, cement and chemicals; five projects on five continents to demonstrate the integration of up to 80 per cent renewable energy into energy grids; and the identification of 100 ‘hydrogen valleys’ worldwide.

The goal is to achieve tipping points in cost by 2030 to accelerate the delivery of technologies to decarbonise sectors responsible for more than 52 per cent of global greenhouse gas emissions.

These demonstration projects are a direct response to analysis by the International Energy Agency that at least $90 billion of public funding is required by 2026 to demonstrate technologies necessary to decarbonise global energy systems, such as renewables, battery storage, and hydrogen-based fuels.

This is contingent on international coordination to prove solutions quickly at scale in multiple configurations and in various regional contexts. These technologies must be commercially viable by 2030 to be deployed at scale to achieve net zero by 2050 (a target that has now been adopted by 104 countries).

Mission Innovation is the leading global initiative to catalyse public-private coordination of research, development and the demonstration of clean energy technologies.

Together they provide the mechanism to drive international collaboration and coordination, allowing governments to work together and with the private sector to target investment and action.

The plans announced include: Net-Zero Industries Mission: at least 50 large-scale demonstration projects to decarbonise energy-intensive industries such as steel, cement and chemicals by 2030 to facilitate the full decarbonisation of industry in multiple regions of the world by 2050.

Green Powered Future Mission: five continental demonstrators integrating up to 80 per cent Variable Renewable Energy into existing electricity grids by 2024. After 2024, the programme will target the integration of up to 100 per cent renewable energy.

And, Carbon Dioxide Removal Mission: six countries commit to funding at least one project that removes 1,000 plus metric tons of CO2 per year by 2025. Participating countries will contribute to a collective goal of $100 million for CDR demonstrations by 2025.

Ursula von der Leyen, President of the European Commission, said: “Research and innovation will propel the clean energy transition that is more needed than ever. Together with our EU Member States, we expect “Team Europe” to make a leading contribution to our shared ambition of investing more, faster and bolder in breakthrough energy innovation demonstration projects.”

John Kerry, US Special Presidential Envoy for Climate, said: “The need for energy that is clean, secure, reliable, and affordable has never been greater. To deploy clean energy technologies at the scale and pace required to avoid the worst consequences of the climate crisis, we need swift and coordinated action from world leaders. Mission Innovation has a critical role to play in achieving our collective climate and clean energy goals by facilitating the international collaboration required to maximise these investments and accelerate clean energy research, development, and demonstration.”