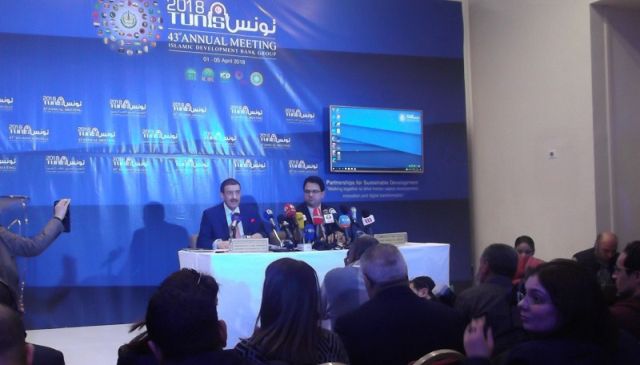 Tunis : President of the Islamic Development Bank (IDB) Group Dr. Bandar Hajjar said on Monday the IDB’s total funding for development projects in the member states of the Organization of Islamic Cooperation (OIC) reached $9.8 billion during 2017.

Hajjar made the remarks at a press conference, during which he launched the IDB’s 2017 Annual Report, in the presence of Tunisian Minister of Development, Investment and International Cooperation Ziad Al-Athari.

During the press briefing, held on the sidelines of the 43rd Annual Meeting of the IDB Group kicked off here on Sunday, Hajjar said the top-five beneficiaries of IDB Group 2017 financing are Egypt, Turkey, Pakistan, Bangladesh and Kazakhstan.

The IDB chief praised the Islamic Finance practiced by the Islamic financial institutions, which is based on the principles of risk sharing and asset-backed finance. He noted the IDB’s efforts over 44 years in the field of Islamic Finance to promote long-term sustainable economic development by launching a partnership initiative with both the public and private sectors, developing financial markets and financial infrastructure as well as expanding the role of the private sector through risk sharing and supporting financial sectors in the IDB member states.

Hajjar pointed out that the IDB seeks new visions for partnerships with the private sector in the Islamic world to train the cadres capable of innovation and production and benefit from the loans granted to them within the framework of what is known as Integrated Development Work Chains. “So this year’s theme was the Partnership for Sustainable Development,” he said.

Asked by the Union of OIC News Agencies (UNA) about the new Science, Technology and Innovation Fund launched by the IDB and what distinguishes it from past experiences to strengthen innovation in the Muslim world, Hajjar said the IDB focuses on the space of science and innovation, so it initiated the idea of establishing a $500 million Science, Technology and Innovation (STI) Fund. He stated the IDB and the Islamic Solidarity Fund (ISF) have each made a $100-contribution to the fund, adding that coordination is underway to provide the remaining amount.

Hajjar explained that the IDB model is a different and distinct model. It is composed of an integrated system including a finance fund, an office for the protection of patent and intellectual property, scholarships and an electronic platform for receiving innovations.

For his part, Minister Al-Athari said the total funding received by Tunisia since the establishment of the IDB reached $3.2 billion, of which $765 million in the electricity sector and $275 million in support of agricultural projects. He added that the sanitation sector, youth employment and education have also benefited from the IDB funding.

previousJayamma's story: From victim to crusader for sex workers