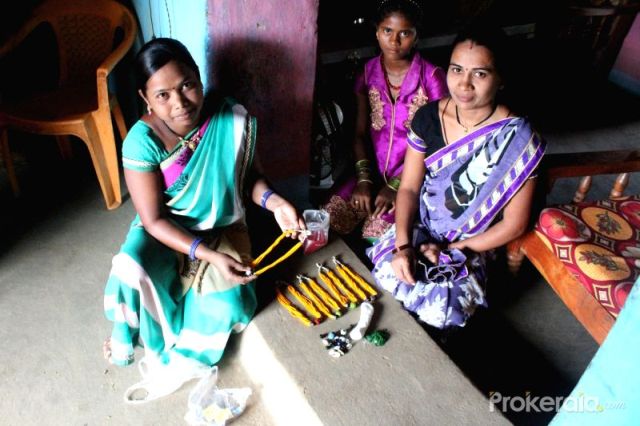 Bandha Tola (Kanha Tiger Reserve) : Dependent on the forest for their day-to-day needs, women of Bandha Tola faced an uncertain future when their whole village, along with hundreds of other such Baiga tribal villages, was moved out of their traditional habitat in the jungles of this famous tiger reserve in central India’s Madhya Pradesh state. But today they feel empowered and foresee a bright future for their forest-dependent tribe and cherish the fact that, despite being relocated, their culture and traditions are alive and flourishing.

Their confidence stems from a small but powerful initiative to market the rare tribal jewellery, handmade by Baiga women, outside this tribal belt for the first time in history.

A brainchild of the Kanha Tiger Reserve’s administration and the Last Wilderness Foundation (LWF), this initiative is not only improving the lives of one of the poorest tribes of India and giving them confidence to compete with others, but it has also brought tribal jewellery into homes of people who have started appreciating the dying art.

“The response is outstanding as people love it and the demand has increased,” say the forest officials.

Sunita Dhurve, a 25-year-old mother of one, says she had no idea that people from big cities would like their work. “It’s as if they liked our culture.”

“We (Baiga) make our own jewellery. It hardly takes a few hours to make these necklaces. If we work as labourers, it gets us Rs 100 for an entire day’s work, time and energy; beside there is no honour as those contractors and other people from big cities look down upon us. But to make necklaces is something we can do at home while doing other household chores,” Dhurve told this IANS correspondent.

She makes necklaces and bracelets from the material provided by the Last Wilderness Foundation, which also collects the artefacts from her to sell them at souvenir shops and e-marketplaces.

Started in October 2017 with just one Baiga woman, the project has gained momentum over the last year and currently around 50 women from three different villages — all situated less than 10 km from the forest’s core area — make colourful bracelets and necklaces, earning their own livelihood.

“It’s great to have our own source of income. Now I am not dependent on my husband for money. I have my own savings and I don’t have to make him happy for every small thing that I need,” quips Sanju Bopche, another tribal woman.

She adds that the first things she bought from her savings was some make-up for herself and a toy for her son from the weekly market at a nearby town.

Even as women feel empowered just by doing what they had always loved to do, a new sense of awakening is evident as they now think of future in terms of more wages for their craftsmanship and entrepreneurship.

While the foundation provides them all the material that they require, they earn some Rs 50-100 per piece. The jewellery is, however, sold for Rs 600 to Rs 1,000 at different souvenir shops and resorts in Mukki zone of the Kanha Tiger Reserve, as well as on e-commerce platforms.

For 16-year-old Indravati, who learnt jewellery-making from her mother Pramodini, Rs 50 or Rs 100 is not enough.

“It may be enough for people living in a forest village, but I know that people in cities pay a lot more for similar craftsmanship. I have saved Rs 6,000 in the last three months. But it would have been more if I could market it myself,” says Indravati.

However, for the foundation and the forest department, the initiative is aimed at preserving the Baiga culture and to reduce their dependence on the forests by empowering them and giving them confidence to start their own entrepreneurial ventures, says S.K. Khare, assistant director of Kanha Tiger Reserve.

He added that the initiative has also built a sense of trust among the people of Baiga community and the forest department.

All the tribal jewellery is customised for urban users. “The necklace is a 20-lined moong-dana necklace while the original that most of the tribal women wear is 40 or more. Similarly, the bracelet is something that tribals generally don’t wear, but it has received a good response,” Khare said.

“It’s a brilliant experience and it is for the first time that their jewellery is being marketed and the souvenir shops have something local to offer. We had received a really good response, but the best response came from online stores and foreign visitors,” said Vidya Venkatesh of Last Wilderness Foundation.

Currently there are only two types of jewellery being made by the Baiga women for marketing: Necklaces and bracelets. Venkatesh said since the project has received great response, they are now looking for expansion by adding two more products — a four-lined anklet and a “Bichaula”, a kind of skin-tight necklace with silver coins.

“These tribal women held workshops for the tourists this season. Their confidence level is high and they are slowly learning the worth of their work and art. It’s a great leap of change for these ladies who earlier used to run away on seeing a forest guard,” said Venkatesh.

(The weekly feature series is part of a positive-journalism project of IANS and the Frank Islam Foundation. Kushagra Dixit can be reached at kushagra.d@ians.in )