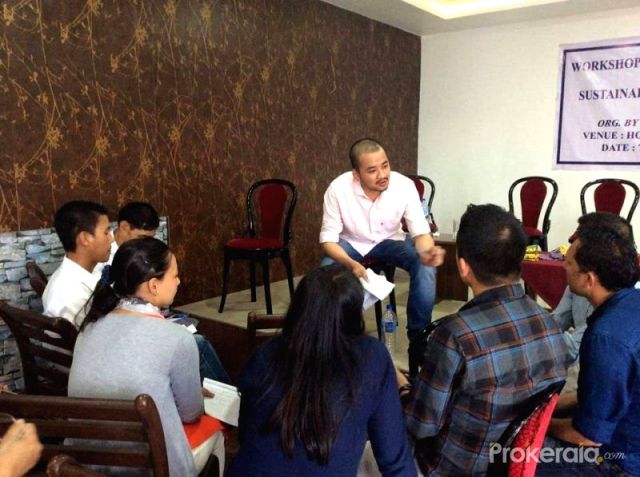 Gangtok : Sikkim has many distinctions that give the tiny state nestled in the Himalayas between India and China a larger-than-life profile. It is the only organic state in India, is litter- and defecation-free, has high literacy and has the best working conditions for women. But the challenge of unemployment it faces is huge which has made many embrace entrepreneurship to not just generate jobs for themselves but to provide employment to the state’s aspirational youth.

Amid negligible presence of the private sector and government employment opportunities already saturated, a small but dedicated band of young entrepreneurs is meeting the challenge head on — using innovative start-ups to generate jobs. Home to nearly 610,000 people, Sikkim boasts of being the third-richest state (after Delhi and Chandigarh) by per capita income in the country.

In 2008, Sikkim became India’s first open defecation-free state. Eight years later, it became the country’s first and the only organic state. A nationwide survey in 2016 said the state had the best working conditions for women in India. The literacy rate is seventh highest and its young are educated but, without jobs, drifting into drugs and despair.

The state has the second-highest unemployment rate in the country after Tripura, also in the Northeast. The unemployment rate per 1,000 people aged more than 15 years was at 136 in 2016-17 in the state, according to the Annual Employment and Unemployment Survey report. Another singularity this least populated state in India holds is that 10 per cent of its population is in government jobs — which is way above the national average of 3.5 per cent.

That is why Chief Minister Pawan Chamling has an advice for thousands of youth waiting for jobs in the state: They should overcome the desire to get government employment and, in fact, help the state to create jobs for others. Some of the youth have taken a cue from the Chief Minister who has been ruling the state for a quarter of a century now.

Among them is serial entrepreneur Rewaj Chettri, who has launched over 30 enterprises — the most recent being the taxi aggregator app, NE Taxi. He started the app with Rs 300 that he spent on purchasing a domain name www.netaxi.in, using shared hosting two years ago. NE Taxi is a tourist cab service catering to travelers in the northeast. He now employees 26 people and has his “annual turnover crossing Rs 3 crore”, making it to the Forbes list of Asia.

“We are a bootstrapped company and all the profits are pumped back to grow the business. We are set to expand to North India by the end of 2020,” Chhetri told IANS.

“I feel that the state government was a platform provider and opportunity creator… We all just need to grab it,” he said, referring to the government’s start-up scheme that aims to disrupt mindset of the youth and instill entrepreneurship spirit among them.

Through the start-up scheme, the government provides financial assistance in terms of seed capital of 25 per cent of the project cost — even 35 per cent in certain cases — entailing total investment up to Rs 20 lakh.

The remaining portion of the project cost has to be arranged from banks by way of loans.

Chhetri and other budding entrepreneurs have started what they call a “Entrepreneurs’ Hub and Consultation Centre” where they build sustainable robust start-up ecosystem in Sikkim with the government’s support.

Among some 3,000 beneficiaries of the initiative is Devika Kerongay, the founder of Fidgety Fingers, a social enterprise that “empowers” women by teaching them craft and knitting, “teaching them how to fish rather than giving them fish to eat”, Kerongay said, adding she needed no investment and took no finances.

“It was started to empower underprivileged and rural women financially and socially… and to reintroduce and preserve the vanishing art form of fibrecraft,” she told IANS.

Women mainly belonging to underprivileged families — school drop-outs, young mothers, urban poor and from rural areas — are trained free of cost to knit, crochet and craft at her enterprise of fibrecraft — the art of making useful and decorative objects by hand or by using only simple tools.

After training, the women either start their own enterprises, or work with Fidgety Fingers that markets their products.

“We have always received encouragement and moral support from the government. The government acquires our products for their officers as well as various of its official functions. The support has been incredible.”

Yougan Tamang is a researcher, journalist, blogger and also a social entrepreneur. A gold medalist in anthropology and a Sikkim State Awardee 2013, Tamang now owns a digital media house Sikkim Chronicle that he co-founded with his friends Nirmal Mangar and Kabita Sharma last year.

“I (always) wanted a job from which I would never retire. Entrepreneurship provided me one. My love for traveling, meeting new people and learning and sharing ideas led me to start Sikkim Chronicle.”

It doesn’t stop there. Tamang wants to expand the Chronicle into a bigger media house “not just in Sikkim but in the entire Northeast”.

The way out of unemployment through entreprenuership and skill development is also helping the otherwise “golden state” with all-round development battle depression and suicidal tendencies of its youth. Sikkim, according to a report, has one of the highest suicide rates in the country.

According to a 2016 study by Indian Journal of Psychiatry, some 1,604 suicide cases were recorded from 2006 to 2015 in the state that also battles a scourge of drug abuse. A majority of those who killed themselves were found unemployed.

(The weekly feature series is part of a positive-journalism project of IANS and the Frank Islam Foundation. Sarwar Kashani can be contacted at sarwar.k@ians.in)