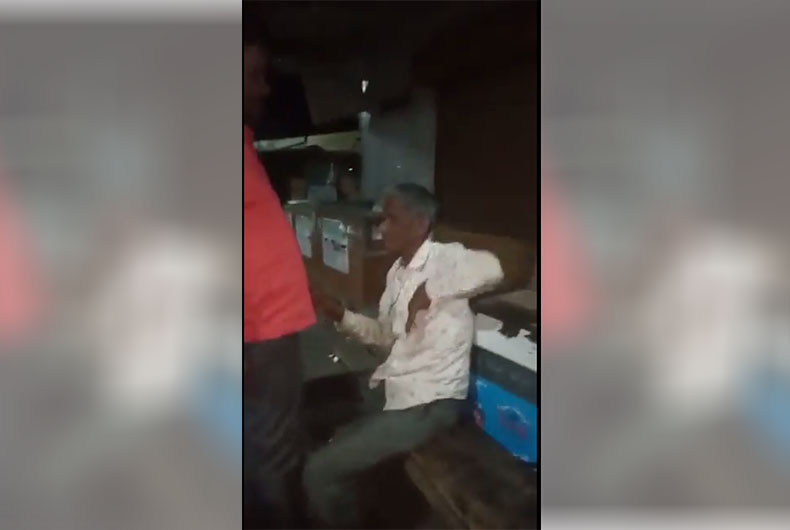 Bhopal: A 65-year-old differently-abled man was beaten to death on alleged suspicion of being a Muslim in Madhya Pradesh’s Neemuch district.

A video of the incident doing rounds on the social media shows a young man mercilessly thrashing the old man.

He was assaulted brutally for not showing his Aadhaar card. The deceased, who was identified as Bhanwarlal Jain of Sarsi village of Ratlam, was found dead in Manasa on Thursday, police said.

Police said Bhanwarlal Jain had gone to Chittorgarh on May 18 with his family. He later went missing. On Friday, he was found dead in Manasa of Neemuch district. Later, the video went viral on social media.

He was assaulted brutally for not showing his Aadhaar card. The deceased, who was identified as Bhanwarlal Jain of Sarsi village of Ratlam, was found dead in Manasa on Thursday, police said.

“We found the body of the victim on Thursday. After his pictures were released on social media, his family members from Ratlam identified him as Bhanwarlal Jain,” said Mansa Police Station House Officer K.L. Dangi.

Is your name Muhammed?

In the video, Dinesh Kushwaha, the husband of Manasa’s BJP corporator is allegedly seen beating Jain demanding his Aadhar card and asking whether he is a Muslim.

“Is your name Mohammed”, the video showed Kushwaha, asking the elderly man and repeatedly assaulting him as he struggled to answer.An FIR was lodged on Saturday under sections 304 (causing death by negligence) and 302 (murder) of IPC.

“Taking immediate cognisance of the matter, an FIR has been registered against the accused Dinesh Kushwaha under Section 302 of IPC”, Neemuch SP Suraj Verma said. Watch the viral video here:

Notably, a communal violence had erupted in Neemuch after Hindus associated with a right wing group attempted to install an idol of Lord Hanuman near a Muslim shrine in Purani Kacheri area on last Sunday. The district administration had seized the idol on Tuesday.

Reacting on one after another incidents in the district, former chief minister and the state Congress president Kamal Nath accused the BJP led state government of failure to maintain law and order situation in the state.

“What is happening in Madhya Pradesh after all? Tribals were lynched in Seoni, incidents of Guna, Mhow, Mandla and now an elderly person whose name is being told as Bhanwarlal Jain in Manasa of Neemuch district of the state,” Nath tweeted.

next‘Not necessarily of …’: Read what Delhi Court said on FIR against DU Prof