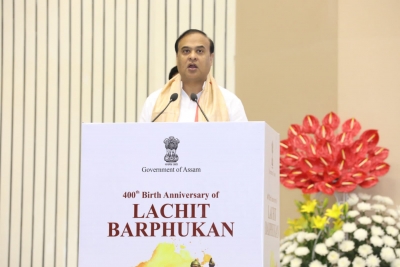 Assam Chief Minister Himanta Biswa Sarma on Wednesday claimed that had the Mughals defeated the Ahoms in the battle of Saraighat in 1671, the entire Southeast Asia would have been very different.

Guwahati, Nov 23,2022:  Assam Chief Minister Himanta Biswa Sarma on Wednesday claimed that had the Mughals defeated the Ahoms in the battle of Saraighat in 1671, the entire Southeast Asia would have been very different.

Sarma was attending the celebrations of the 400th birth anniversary of Ahom commander Lachit Barphukan at Vigyan Bhawan in New Delhi.

Speaking on the occasion, he said that the saga of courage, patriotism and sacrifice displayed by Lachit Barphukan – the great Ahom army general – is undoubtedly one of the most glorious chapters of Indian history.

“It was Lachit’s leadership and generalship in the battle of Saraighat in 1671 that ensured the continuation of Ahom rule, which in turn led to the preservation of indigenous Assamese identity and culture,” he stated.

He added that had the Ahoms succumbed to the invading Mughals, the unique cultural identity of not only Assam but the entire Southeast Asia would have been different. It is, therefore, important that Lachit Barphukan is accorded his due place in history in the manner other great warriors and monarchs of the ancient and medieval periods have been honoured.

Sarma lauded the Ahom rule for providing political stability and unity to Assam for the first time, that too in a period when instability and destruction of indigenous Indian cultural identity by the Islamic invaders had become the norm in other parts of the Indian subcontinent.

“Despite such a glorious saga, the Ahom rule and generalship of commanders such as Lachit Barphukan have not been discussed, written, or researched upon by prominent historians,” he commented.

He expressed the hope that the current government initiatives would be successful in reversing this trend.

The Assam government has organised a 3-day programme to celebrate the 400th birth anniversary of Lachit Barphukan in the national capital.

Sarma said that the initiative to organize Lachit’s birth anniversary in the national capital would make the people of India realize that the country had better kings and monarchs than Aurangzeb.

A panel discussion was also held on the “Ahom saga of hope, skills, and courage”, moderated by former Chief Secretary Jishnu Barua with participation by Lt. General Rana Pratap Kalita, former Director General of Police Prakash Singh, and others.