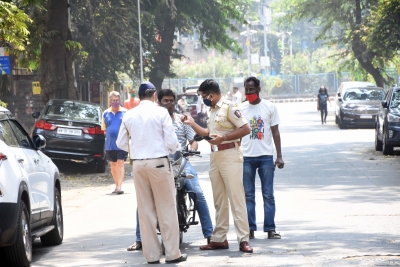 Gurugram Traffic Police have collected Rs 8.81 crore as fine from 8 lakh traffic violators for non-compliance with traffic rules between January and August this year, the police said.

Gurugram, Oct 6,2022:  Gurugram Traffic Police have collected Rs 8.81 crore as fine from 8 lakh traffic violators for non-compliance with traffic rules between January and August this year, the police said.

According to the police, most of the challans have been issued for driving in the wrong direction including 29,548 challans issued on a manual basis for the wrong direction; 154 for tractor trolley; 72 for illegal sirens; 17076 for without high security number plates; 1,267 for no entry; 3,651 for excess seating capacity; 307 for black films; 137 against pressure horn and without high security; 1,195 for dangerous driving; 93 against school bus and 3,679 challans without a number plate.

Apart from this, a fine of Rs 1.31 crore was collected through postal challans against 164 vehicles.

Commissioner of Police, Kala Ramachandran, said that over time, the police of Cyber City has also started the process of online challenging by hi-tech system.

“Under this project, more than 1100 CCTV cameras have been installed on the main roads, square intersections and red lights in Gurugram, which are being operated by the Integrated Command and Control Centre (ICCC) of the Police Headquarters,” she said.

Through this whole process, postal challans of those who avoid the traffic rules are being sent along with the photo against the violators.

“To make people aware of traffic rules in Gurugram, we appeal to people to follow the traffic rules in public places so that they can save themselves and their families from road accidents and avoid being a victim. Every effort is being made by the traffic police in Gurugram to get rid of the problem of traffic jams and ease the traffic in the cyber city by taking continuous action against the violators as per the rules,” Ramachandran said.

nextPunjab to fill around 2,500 posts in police department