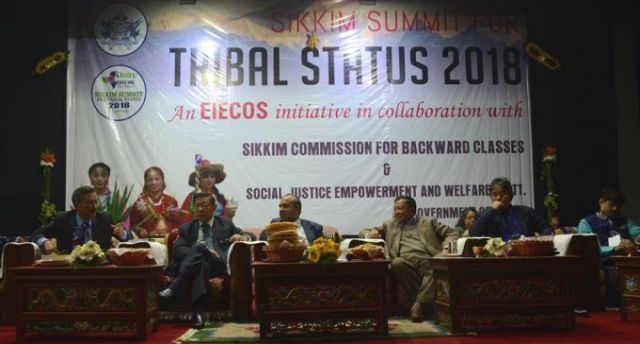 Gangtok : Calling upon the Central and Sikkim governments to consider granting the ST status to all the indigenous communities of the state in alignment with a constitutional provision, a resolution has affirmed that it would ensure lasting peace and prosperity.

“We recommend to the government of Sikkim and the government of India, that the Scheduled Tribes status be considered in alignment with the provisions of Article 371 (F) of the Constitution of India, for all the communities of Sikkim. This will ensure lasting peace and prosperity,” said the Gangtok Resolution, adopted after the two-day Sikkim Summit for Tribal Status 2018 here on Friday.

Article 371 (F) of the Indian constitution deals with special provisions with respect to the state of Sikkim.

Out of the 20 indigenous communities in Sikkim, 11 Sikkimese Nepali communities are yet to get ST status.

The summit brought together leading scholars and policy makers to present their views on the decades-old demand to recognise the 11 communities in the ST list of Sikkim, thereby making it a tribal state.

The resolution, read out by Sikkim’s lone Lok Sabha member P.D. Rai, reminded the authorities that the state had overwhelmingly voted to join the Indian union at a historic referendum on April 14, 1975.

“After the merger of Sikkim with the Indian union in 1975, a section of the Sikkimese people were recognised as STs and SCs of Sikkim, as per the prevailing Constitution of India, and the rest, specially, the Sikkimese Nepali community were left out from this affirmative action,” Rai said.

Stressing that the remaining communities had the right to be recognised as STs, the resolution sought justice and rectification of the wrong done to them.

The event was organised by EIECOS – an association of the registered 11 indigenous ethnic communities of Sikkim – along with the Sikkim Commission for Backward Classes and the state’s Social Justice Empowerment and Welfare Department.

Summarising the deliberations, Rai said the process has to be taken forward.

“The most important task before us is the question of documentation, to get all the papers in, and all the other writings we need to do, and then have it ventilated in some form of workshop, and then come up with some real concrete steps that we need to take forward,” he said.

An interesting feature of the summit was that all the 11 indigenous communities’ leaders argued their cases for being given ST status.

previousWorld slammed for ‘doing nothing’ over Rohingya issue