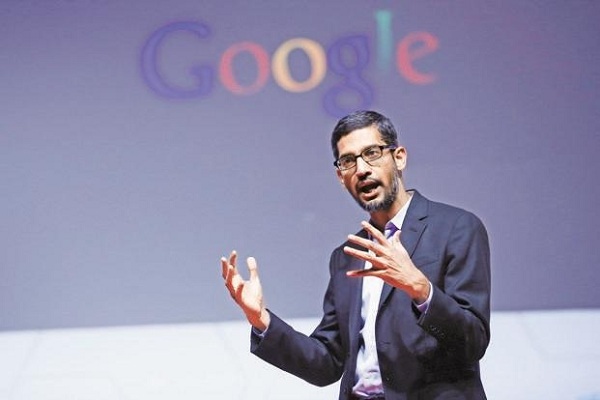 Washington:(IANS) Google’s Indian-American chief executive Sundar Pichai sided with rival Apple in its battle over a court order to help the FBI access information on the encrypted iPhone used by a Pakistani-American shooter in San Bernardino.

Pichai Wedenesday directed followers to Apple Chief Executive Tim Cook’s open letter Tuesday night arguing that helping the FBI try to get into the phone used by Syed Rizwan Farook would sabotage the security of “tens of millions of American citizens.”

Farook and his Pakistani origin wife, Tashfeen Malik, gunned down 14 people at a social services agency Dec 2 in San Bernardino, California, before being killed in a shootout with police.

FBI Director James Comey said last week that investigators still haven’t been able to get at the information on Farook’s iPhone 5c.

A Riverside, California court Tuesday directed Apple to help FBI crack the phone by developing software to hack into one of its own devices.

In a series of tweets Wednesday evening, Pichai argued that even that would essentially put tech companies in the position of hacking their own customers:

1/5 Important post by @tim_cook. Forcing companies to enable hacking could compromise users’ privacy.2/5 We know that law enforcement and intelligence agencies face significant challenges in protecting the public against crime and terrorism 3/5 We build secure products to keep your information safe and we give law enforcement access to data based on valid legal orders 4/5 But that’s wholly different than requiring companies to enable hacking of customer devices & data. Could be a troubling precedent 5/5 Looking forward to a thoughtful and open discussion on this important issue.

The government, Cook contends, is asking Apple to create a “backdoor” to its own security systems.

“Up to this point, we have done everything that is both within our power and within the law to help them,” Cook wrote in a letter published on the company’s website.

“But now the US government has asked us for something we simply do not have, and something we consider too dangerous to create.”

Reacting to Cook’s stand, Republican presidential front-runner Donald Trump said he was floored that Apple had not volunteered to aid the FBI. “Who do they think they are?” he asked on Fox News.

Speaking to reporters in South Carolina, Senator Marco Rubio said he hoped the tech giant would voluntarily comply with the government’s request, but acknowledged the court order is far from a simple issue.

(Arun Kumar can be contacted at arun.kumar@ians.in)