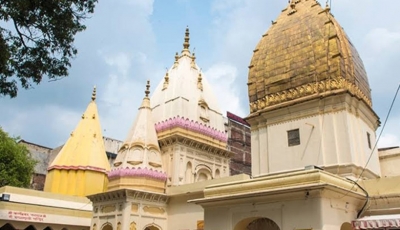 A photo exhibition and cultural tour was organised for the first time at the historic Raghunath Temple in Jammu.

Jammu, Nov 25,2022:  A photo exhibition and cultural tour was organised for the first time at the historic Raghunath Temple in Jammu.

On the occasion of World Culture Week, Indian National Trust for Art and Cultural Heritage Jammu Unit organised the exhibition under Dharma Earth Trust and Jammu Municipal Corporation Urban Forestry Division. Apart from this, cleaning and trimming of tree branches were also done.

The NSS volunteers from Jammu University’s Department of Tourism and Tourism and GGM Science College also actively participated. The temple priests provided information about everything and every part of the Raghunath temple.

Raghunath temple is the largest temple in the UT. The aim of this kind of programme was to provide the young generation with a complete knowledge about the importance of this historical temple in the city of Jammu.

Dr C.M. Seth in his address spoke about the architectural heritage of the temple complex including national heritage, trees, water bodies and the scientific approach adopted by the erstwhile Dogra rulers during the construction of this important temple. He also shed light on the Maharaja’s desire to make Jammu the capital of North India.

Addressing the students, Dharmaratha Trust President Ajay Gandotra said that the trust was managing around 114 temples in Jammu, Kashmir, Himachal Pradesh and Haridwar. He highlighted the role of the Trust in preserving the magnificent cultural heritage of Jammu and Kashmir.

Gandotra said the temple premises also includes the Raghunath Temple’s Sanskrit Manuscript Library, which houses more than 6,000 manuscripts in several Indian languages, including a remarkable collection of Sharada script Sanskrit manuscripts, which Sanskrit scholars consider as rare books found all over the world.

The President of Dharmaratha Trust asked the students to consider the temple as a marvel of the region’s rich heritage and to realize the essence of its religious significance and its popularity which has made the site popular among pilgrims from home and abroad. He asked the students to visit other temples of Dharmaratha Trust and see their magnificent architecture and feel proud to be a part of this region.

Later, an art workshop was held showcasing over 100 heritage temples of Jammu and Kashmir. An exhibition of local handicrafts was also held in which local folk handicraft works like bena, chabri and other products were displayed to enhance the knowledge of the students.