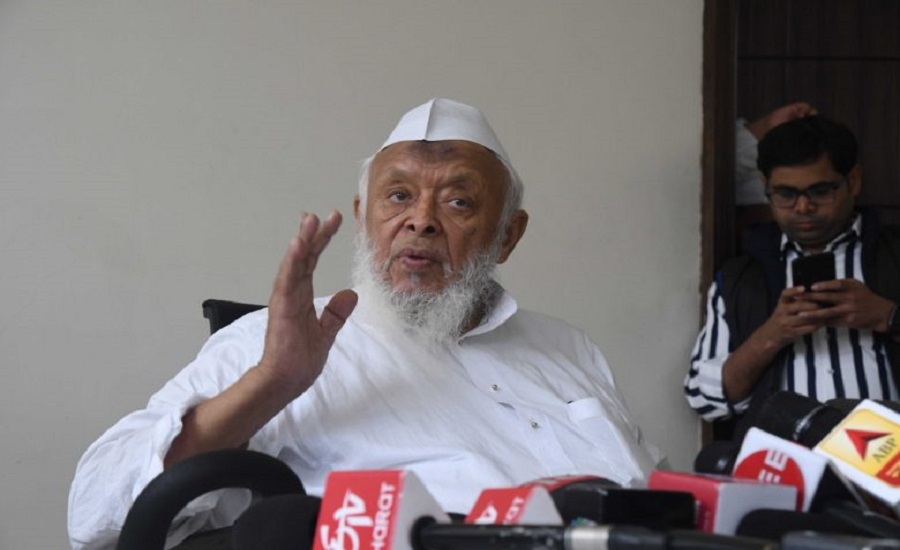 The Maulana regretted that successive governments in the post Independence India excluded Muslims from the field of education as a policy.

NEW DELHI – President of Jamiat Ulama-i-Hind Maulana Arshad Madani said on Friday that the kind of religious and ideological war unleashed on Muslims today cannot be countered by any technology, but by equipping the younger generation with higher education. Alluding to recent unsavoury developments in the country, violence and threat of violence culminating in the call of genocide of the community, he said the war can be won through knowledge and consciousness.

Maulana Madani said this while speaking at a function organised at the Jamiat headquarters to announce scholarships for the academic year 2021-22.

After announcing the scholarship, he dwelt at length on the contemporary challenges to Muslims. Through education, he said the generation next can also reach the milestones of success and prosperity. He regretted that successive governments in the post Independence India excluded Muslims from the field of education as a policy. He cited the Sachar Committee’s report to testify this phenomenon. The report clearly states that Muslims lag behind the Dalits in the field of education.

Maulana Madani asked whether this happened spontaneously or Muslims deliberately withdrew themselves from education. None of this has happened, but all the governments that came to power have kept Muslims backward. Attempts were made at isolating Muslims from the mainstream education through putting obstacles in their way.

He said it is high time Muslims gave higher education to their children on priority.  We desperately need schools and colleges in which our children could obtain higher education in a religious environment without any hindrance or discrimination. In this context, he made an appeal to influential people having wealth to invest in building schools and colleges rather than on politics and marriages.

The Maulana underscored the need for professors, doctors and engineers in the same way we need muftis, scholars and huffaz. Unfortunately, he lamented that Muslims, especially in northern India, are not paying due attention to what is most important for them at the moment.

He further said in keeping with the need of the hour, Jamiat Ulama-i-Hind have set up educational institutions, such as B.Ed colleges, degree colleges and ITIs in different provinces. The scope of Jamiat Ulama-i-Hind was very wide and it is working on all the fronts successfully. While Jamiat is setting up schools and madrassas, it is also focusing on education that provides employment, added Maulana Madani.

In pursuit of this objective, he said the Jamiat had been providing scholarships to needy students for years so that intelligent and hardworking students are not deprived of education due to lack of resources. There is no dearth of intelligence and aptitude in our children, he said citing recent survey reports which revealed that not only education ratio among Muslim children has increased, but there has been a phenomenal increase in the educational trend as compared to the past.

Therefore, Jamiat Pesident said the community does not need to be discouraged, but rest assured that if they mobilise and encourage them, they can overcome every obstacle in their way, and achieve the goal. He said the same spirit was behind the establishment of a coaching center in the name of Madani 100, under which the process of free coaching for financially weak students to prepare for competitive examinations has been going on regularly. That is not enough. We need coaching institutes with our own schools and colleges in all corners of the country.

Under the Jamiat scheme, every year, scholarship is given away to the students, irrespective of religion, belonging to economically weaker sections (EWS) pursuing engineering, medical, educational, journalism or any technical and professional courses. The criterion for the scholarship is that the students should have scored at least 70% in last year’s examination.

The date for submission of scholarship forms for the current year 2021-22 is from January 20 to February 14, 2022. The forms can be downloaded from the website www.jamiatulamaihind.org.

During the last academic year, scholarships were given to 656 students who were selected for various courses, including Hindu students. This is a proof that the Jamiat Ulama-i-Hind does not discriminate its beneficiaries on the basis of religion.

Along with the scholarship, a coaching institute called “Madani 100” has also been started in collaboration with Maulana Hussain Ahmad Madani Charitable Trust Deoband and Hindguru Academy Delhi on the initiative of Maulana Arshad Madani, in which intelligent, hardworking but financially weak students are being provided free coaching along with free accommodation to prepare for competitive examinations.