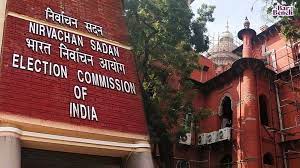 The Election Commission on Wednesday announced that it has changed the date of voting for bypolls to two Assembly seats of Maharashtra’s Pune district from February 27 to February 26.

New Delhi, Jan 25,2023: The Election Commission on Wednesday announced that it has changed the date of voting for bypolls to two Assembly seats of Maharashtra’s Pune district from February 27 to February 26.

The decision came after it was informed about the polling dates in Chinchwad and Kasba Peth seats were clashing with scheduled Class 12 and graduation exams.

The poll panel, on January 18, had announced by-elections to Assembly constituencies of Arunachal Pradesh, Jharkhand, Maharashtra, West Bengal, Tamil Nadu and Parliamentary constituency of Lakshadweep would be held on February 27 and counting on March 2.

Subsequently, the Pune District Election Officer reported the polling date clashed with dates of 12th Standard HSC exam and graduate degree exam to be conducted at various polling stations of the Assembly constituencies where by-elections are being held.

The Commission having considered the matter, ground situation and all other relevant aspects of the matter, has decided to revise the date of polling for by-elections to the two seats.

nextDGCA amends rules, airlines to reimburse up to 75% of ticket cost to flyers if downgraded involuntarily