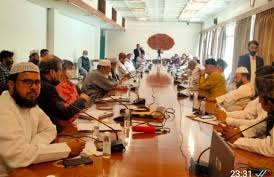 New Delhi: A “closed door meeting” involving Muslim community leaders, including some dubious  Maulanas, held here on Wednesday to “chart out a strategy” to deal with the increasingly hostile socio-political situation vis-à-vis minorities, Muslims in particular, in the country.

While nothing in concrete came out in the open from the closed-door meeting, sources confided to the Muslim Mirror that most of the participants “have record of dubiously using political brinkmanship for their own interests.” The meeting, dubbed ‘Jirga for Strong India’ – a term borrowed from Afghanistan meaning consultation – broadly stated to set up “a platform” to oppose the contentious citizenship regime and other anti-people policies of the Narendra Modi government.

The sources, however, said that they “smartly stated oft-repeated claims to support the weak and marginalised” only to “protect themselves from community wrath”.

A journalist, who is in the know of the meeting, told Muslim Mirror that the “Maulana is known for organizing such meetings to serve his own interest. Notably, one of the tall figures in the meeting was part of the mega “Save the Constitution and Save the Nation” rally in Patna a couple of years ago which ended up in securing an MLC seat for an Urdu newspaper journalist in Bihar legislative assembly.

In the Wednesday meeting, he was not in the forefront but used his proxy to extend an invitation to people for the meet.

The proxy is a discredited person in the community who was made a member of the All India Muslim Personal Law Board by him despite knowing he had indulged in dubious activities during his stint as the Delhi Waqf Board member. It is said he was the person who invited community leaders for the meet.

Undoubtedly, there were some leaders who participated in the meeting who had impeccable character and their sincerity towards the community’s cause cannot be doubted. However, it is puzzling how they were trapped in this.

The journalist said the community should be made aware of such self-styled leaders who are having “ulterior motives” behind such exercise using Muslim Personal Law Board platform to achieve their self goals.

Most of the Maulanas who were present in the meeting are members of Board.

When one of the expected attendents inquired about the agenda of the deliberation, the proxy reportedly told him that the Maulana wanted to set up ‘sort of a platform having representation of Muslim bodies’, to chalk out future course of action’.

nextWhy the Masjids should welcome women and be the learning hubs