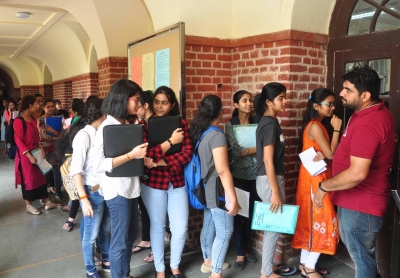 A committee has been constituted for redressal of complaints regarding admission of students in colleges affiliated to the Delhi University, officials said on Friday.

New Delhi, Sep 23,2022: A committee has been constituted for redressal of complaints regarding admission of students in colleges affiliated to the Delhi University, officials said on Friday.

The admission process for the under-graduate as well as the post-graduate courses in the Delhi University would be starting from October.

Keeping this in mind, the Admission Committee of the student organisation CYSS has been formed in which senior professors and students of the Delhi University have been included.

Chandramani Dev, president of student organisation CYSS, said that the students can send complaints regarding admission related problems through WhatsApp, and also raise them over telephone.

Several phone numbers have been published on which admission related issues and problems can be discussed.

The students can also share and mention their problems on e-mail.

Hansraj Suman, president of Delhi Teachers Association has said that the students should complete their admission formalities from home.

“By staying at home, the students can fill the admission form… in case there is any problem, then they can get information on the given phone numbers or through WhatsApp,” he said.

“If the students face any problem related to to any certificate or caste certificate, or if any kind of error happens during admission, they should first contact the college and if their problem is not resolved then they can contact on the given numbers,” he added.