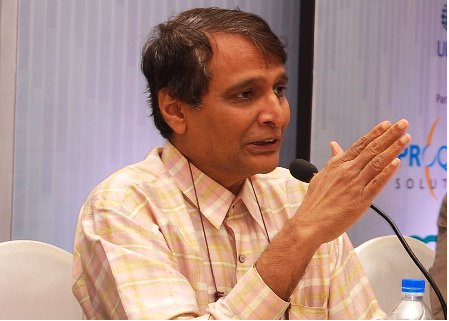 New Delhi : The Union Commerce Ministry has decided to make the country’s districts as the operative unit as part of a revamped strategy for boosting exports that would incentivise the states, and has asked them to appoint nodal officers at district level towards this end, Commerce Minister Suresh Prabhu said on Monday.

Briefing reporters here following a meeting of the Council for Trade Development and Promotion (CTDP), including states’ representatives, he said that with states being well aware of their responsibility in this area, it had been decided that all of them should have their individual export policies.

“We have decided to make the district as the unit for exports, rather than the state. We are in the process of preparing a strategy whereby 40 per cent of our GDP should come from global trade and half of that from exports,” he said.

“India needs to incentivise states to promote exports. We have asked the states to appoint at least one nodal officer at the district level, which is the closest to the local market,” the Minister said, elaborating that although the Centre is responsible for the country’s foreign trade, the actual sourcing is done at the state and local levels.

Noting that it had been decided that all states should have an export policy, Prabhu said 14 states, including Gujarat, Tamil Nadu, Karnataka, Jharkhand, Assam, Tripura and Manipur had already prepared policies, while Goa, Delhi and Sikkim are about to start preparing theirs.

“The idea of incentivising states has just been mooted, we have not worked out any package. States are feeling responsibility because they will only be benefiting from increased exports,” he said.

Prabhu also said that with the high logistics costs in India affecting export competitiveness, the his ministry is also looking at the sector being handled by a separate ministry.

“We’re working at making logistics a separate subject that could be handled independently by a ministry,” he said.

He also released two booklets on the occasion that have been prepared by the Department of Commerce. One is an analysis of state exports, while the other is a report on the logistics situation across states.

next5 die in Bengaluru blaze: No safety norms followed