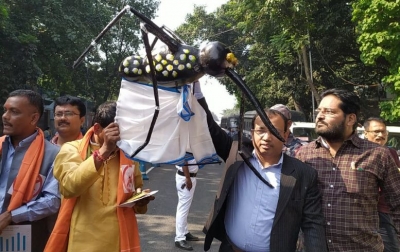 BJP legislators in West Bengal Assembly adopted a unique approach to protest against the alleged lackadaisical approach of the state government in tackling the dengue menace in the state.

Kolkata, Nov 22,2022:  BJP legislators in West Bengal Assembly adopted a unique approach to protest against the alleged lackadaisical approach of the state government in tackling the dengue menace in the state.

The saffron MLAs on Tuesday protested within and outside the House with a giant mosquito replica sporting a white saree with blue borderline, the trademark attire of Chief Minister Mamata Banerjee.

The BJP also moved an adjournment motion in the House seeking discussion on the dengue situation in the state.

Although Speaker Biman Bandopadhyay allowed reading out of the adjournment motion proposal, he didn’t allow any discussion in the House on the matter.

Irked by that, the BJP legislators, led by leader of opposition Suvendu Adhikari, started protesting holding the mosquito replica clad in white and blue sari.

Later, they staged a walkout carrying the replica and started raising slogans on the lawn in the Assembly premises.

Some BJP legislators were also seen carrying mosquito nets, which they were seen distributing among the people present outside the Assembly.

This is the second straight day that the Assembly witnessed ruckus following protests by the BJP legislators.

On Monday, the saffron MLAs had staged similar protests after the Speaker refused to admit an adjournment motion condemning the recent derogatory comments made by state minister and Trinamool MLA Akhil Giri concerning the looks of President Droupadi Murmu.

The BJP legislators protested sporting posters round their necks that carried pictures of the President.

After the protests on Tuesday, Suvendu Adhikari interacted with mediapersons wherein he levelled two allegations against the state government.

The first was a recent invitation card sent by the Assembly secretariat for the inauguration of a new building within the Assembly premises which did not carry his name as the leader of opposition, although it had the names of Mamata Banerjee and Speaker Biman Bandopadhyay.

“This is unprecedented in the history of Assembly protocol,” Adhikari alleged.

The second allegation was related to delay in appointment of a permanent Assembly secretary.

“The Assembly secretary is appointed by the Calcutta High Court. Two months back, an individual named Bhaskar Bhattacharya was appointed for that chair. But he is yet to assume charge following the reluctance of the state government,” Adhikari alleged.