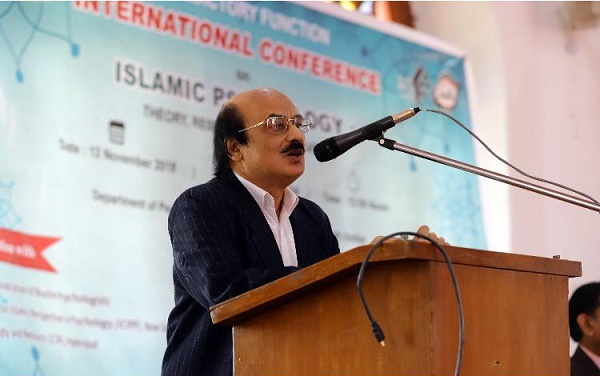 Renowned thinker and Islamic scholar, Chair of Islamic Studies & Research, Yenepoya University, Mangaluru, Dr. Javed Jamil has lambasted the market forces for “reconditioning human psychology” for their own ends causing “huge devastation of life and peaceful existence”. He was delivering the Valedictory Address in the Valedictory Session of the three-day seminar on “Islamic Psychology” organised by Department of Psycology, Aligarh Muslim University onj 12th November. The Seminar was attended by a large number of delegates including 35 participants from countries across the world.

Dr. Jamil presented an overview of his Islamic Dynamic Paradigm of Health. He told that the modern world system is being controlled by the forces of “Economic Fundamentalism” and they are busy in commercialising human susceptibilities. “They first industrialise the problems and then they commercdialise the solution”, he said. He said that “in contast, Islamic System gives primary importance to life and healthiness of life.” He argued that the Paradidm basede on Islamic teachings will also make the system and family responsible for protecting the health of the individuals. “The System should not allow the prople to get exposed to the dangerous items and practices”, he argued.

Dr. Jamil gave statistics to show that more than 70 million lives are lost annually in the world because of indulgence in practices declared Haram (prohibited) in Islam. He said that Alcohol, Unhealthy Sexual practices, especially homosexuality and promiscuity are the biggest killers. Specifically, he targeted the Human Rights organisations for overlooking the colossal slaughter” of human foetuses telling that more than 50 million human beings are borted every year in the name of the “rights of women”. He argued that “Freedom of Choices” has become the “biggest weapon in the hands of the market forces” and people are being “reconditionied to think the way the market forces want them to think”.

Dr. Hamil appealed to the Islamic Scholars to aggressively unveil the destructive effects of the modern paradigms, policies and programmes and appealed to them to poipularise “Applied Islamics”. Later he told this reporter that he has started a one year course of Postgraduate Diploma in Applied Islamics in Yenepoya University, which is running successfully.

The Session was prsided over by PVC of AMU, Dr. Hanif Baig and Dr. Akbar Husain, Dean of Faculty of Social Sciences gave the detailed introduction of Dr. Jamil. Prof. A R Kidwai was also present on the occasion.