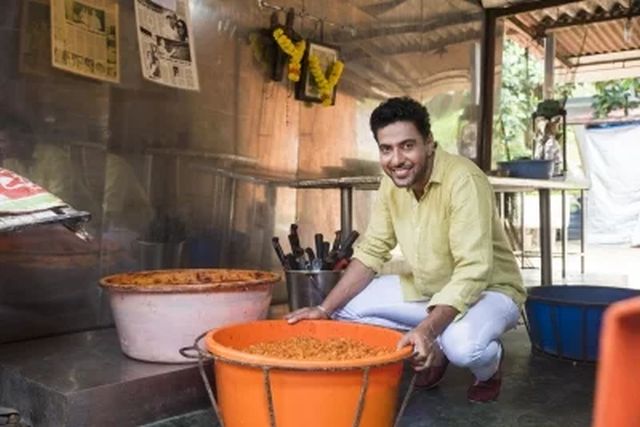 New Delhi : Time was when many trains on the Indian Railways network featured dining cars where you could savour a leisurely meal of your choice as the landscape rolled by. Today, you are served at your berth in a plastic container containing food that is not necessarily your choice. Fear not. The good times are back as Chef Ranveer Brar, after an arduous 50-day shoot unveils “The Station Master’s Tiffin” on the small screen to literally take you back into time.

“We realised that we are probably the last generation that has seen the railways in their full bloom because we never used to fly, we used to always take the trains. That was a story that needed to be told. The food that is so famous or used to be famous on the stations that people used to wait for, wake up for or die to eat also needed to be spoken about,” Brar, Masterchef India judge, senior executive chef and travel show host among the multifarious caps he wears, told IANS in an email interview.

“Destinations that are famous because of the trains needed to be spoken about. There is a whole culture and sub-culture of eating that trains have created that needed to be spoken about and hence we said let’s do a show and also have some fun,” Brar said of the 14-episode show that premiers on LF channel on October 3 and will air on Wednesday’s and Thursdays at 8 p.m.

Extensive research has gone into the series.

Two recce teams were at it for more than a year but after two episodes were shot, it was realised that not enough research been done.

“So we went back into researching. We hired experts of the subject. Among them was Arup Kumar Chaterjee who has written a book called “The Purveyors of Destiny” on the Indian Railways. We tried to do it in the right way,” said Brar, whose other TV shows are “Great Indian Rasoi”, “Ranveer’s Cafe, “Healthy but Tasty” and “Global Menu” and who has also authored a book titled “Come Into My Kitchen”.

Ever a hand-on man, Brar was on the road for 50 days during the shooting.

“The shooting has been an exhilarating experience. Being a part of the culinary field, I have had the opportunity to visit various countries and learn new culinary techniques. But travelling through my own country in trains, visiting wonderful places, discovering inspiring stories of people who treat you as their own household member, was hands down one of the best experiences of my life. The entire journey encompasses all the four corners of the country and viewers will get to enjoy an insider’s perspective.

“The shooting was on the trains, on railway stations and it was at destinations where only trains can take us. So, for example, we also shot at Sundilla (in Telengana), a destination where only a train takes you.

He, however, was unwilling to part with other details of the show “as this would spoil the surprise”.

Any interesting nuggets from the shooting process?

“Lots of interesting nuggets. One of my most fascinating train journeys has always been the toy train from Kalka to Shimla and through the Barog tunnel. I think people still believe it’s haunted. It was quite a thing when I walked in it with a lantern at 1 a.m. in the night. It was very interesting.

“Also, Sundilla ke Ladoo is something many people have grown up eating but never knew how it is made because nobody stops at Sundilla. I went back to Sundila and figured out how the ladoos were made. That was fascinating because otherwise you just pick the ladoo at the station and just leave,” Brar said.

What’s next on the cards?

“I will continue travelling and exploring, that is for sure. Let’s see where the travel and journey takes me,” he said.

The show will also be telecast on Zee TV every Sunday at 12 noon from October 7 onwards.

(Vishnu Makhijani can be contacted at vishnu.makhijani@ians.in)