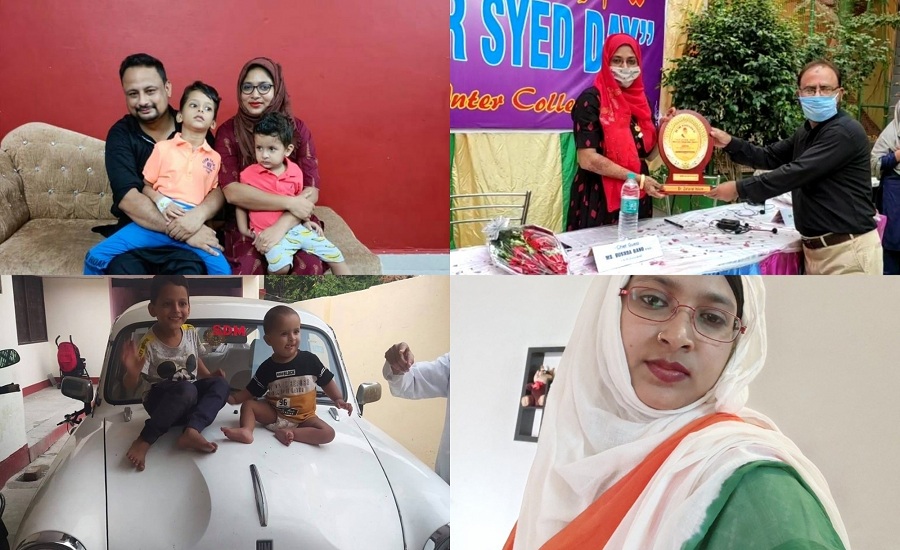 Bushra is mother of two children, both born through caesarean surgeries. Besides, she had to endure two more major surgeries. Yet her resolve to continue her education and later pursue competitive exams for various Indian services remained unaffected

ALIGARH – Its very rare in the history of Indian civil services that women candidates face interviews when they are more than eight months pregnant and have undergone multiple surgeries.

Dr Bushra Bano, a resident of Sork Qaswa in Kannauj district, uttar Pradesh, and Sub Divisional Magistrate (SDM) of Firozabad (Sadar tehsil), has faced this odd meritoriously. She has secured 234th rank in the latest UPSC list of successful candidates. She was allotted the Indian Police Service (IPS).

Bushra is mother of two children, both born through caesarean surgeries. Besides, she had to endure two more major surgeries. Yet her resolve to continue her education and later pursue competitive exams for various Indian services remained unaffected.

“I was a gifted child since childhood. At least this is what my parents feel proud of and all my acquaintances admit. I started my primary education at the age of four in Class 2. All through my academic life, I have been a topper. After completing my B. Sc in Mathematics (usually rare for girls in India), I decided to go for an MBA and I completed that before I turned 20.

“Just after that I joined PhD in Management at Aligarh Muslim University (AMU). The very next year, I qualified for the Junior Research Fellowship (JRF) that gave me confidence to make my education self-reliant and a passion to earn on my own. I finished my PhD in a short time of two years and few months,” Bano told this correspondent in a candid chat from Firozabad.

She said that while she was still pursuing her research at AMU, she started teaching at Hindustan and Anand Institute in Agra.

However, the Saudi sojourn was not suiting her heart.

“I was working there, but my heart always stayed in India. The only memorable thing for us was to perform a pilgrimage to Mecca. After four years, it became impossible for me to defy the pangs of homesickness. I consulted my husband and resigned. He stayed back,” said Bano, insisting that it was the most difficult decision of her life.

After arriving in India, Bano didn’t sit idle. She was now a mother of a son. She joined a post-doctoral programme in AMU and at the same time started preparing for various competitive exams.

“In June 2018, I cleared the Mains of both the exams. I was pregnant with my second child then and when interviews were conducted, I was in the last stage of my pregnancy. The UPSC first declared its list. I had secured 277th rank and was allotted the Indian Railway Traffic Service (IRTS). Later, when the PCS result was announced, my rank was 6th and that meant I was eligible to become Deputy Collector or Sub Divisional Magistrate (SDM). Thus, I joined as SDM of Firozabad Sadar in 2020,” said Bano.

Bano also shared an interesting episode of her married life.

“In families with kids, it is usually women who sacrifice. But in my case, my husband sacrificed his Saudi job for me. Since it became clear that I would work in India and our children would also be with me, he decided to resign from his job and join us in India. Now, he works as a businessman,” said Bano.

She added that her husband, who was teaching without a PhD, is now also pursuing a PhD.

As an SDM, Bano has been famous for her stand on illegal mining in Firozabad. She has also been strict in ensuring law and order and devising ways to bring relief to weaker sections of society.

She wears a hijab and it raised some eyebrows in her office. “Some people thought I was a ‘kattar’ (hardliner) Muslim. But, when they began to understand me, their doubts melted and now I am their favourite madam,” said Bano.

One of the most joyous moments in her life came when her another attempt at UPSC brought her 234th rank and she was allotted IPS.

“But I have decided that I will join it only when I am offered my home cadre. Otherwise, I am happy as SDM in UP,” she said.

Bano’s advice to young Muslims, especially girls and their parents, is that youth should be given the choice to pursue their passion at whatever stage in their lives.

“I chose to quit my Saudi job, come to India and opt for these services and my family supported me. Such cooperation from your dear ones makes a lot of impact in your life,” said Bano.